After publishing ten books with traditional presses, I indie published a book. That experience expanded my understanding of the publishing industry. Today, I’m starting a series of posts by and about indie publishing.

Note that most of the books mentioned in this blog are for sale at my online bookshop: Books Featured on the Write Now! Coach Blog 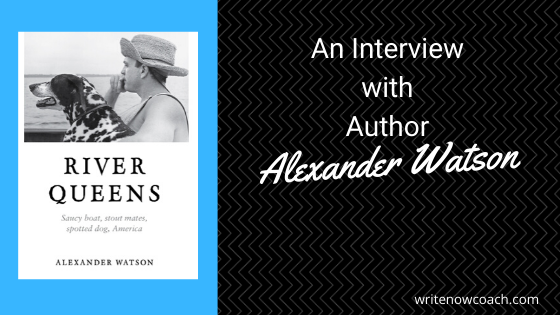 Writers@Work: An Interview with Alexander Watson

Welcome to the blog! Tell our readers a bit about your book, River Queens.

River Queens: Saucy boat, stout mates, spotted dog, America chronicles in a river journey what we, Americans, are witnessing with the coronavirus outbreak. When the chips are down, the people of this country come together. The chips-being-down in the book was Dale’s, my wedded partner, and my launching a 1955 Chris Craft motor yacht across the Heartland from Oklahoma to Ohio on the Great Southern Rivers: the Arkansas, Tennessee, Cumberland, and Ohio.

We knew nothing about boats before buying and restoring the vintage craft in 2001; neither did we know anything about river cruising before we shoved off seven years later.

We were babes in the woods, relying on the “kindness of complete strangers,” as Blanche DuBois says, for everything from tech support to drinking water. We found that strangers on the water become acquaintances, if not friends, almost instantly because we share two things in common: 1) the river and 2) the ancient seafarer’s code, “Always render aid.”

Can you talk about the journey you took from writing a blog about your journey to turning that into a book? What were the steps you took to get a finished manuscript?

I am a reluctant writer. I was watching Ken Burns’s Jazz series on PBS last night even as I knew I should be drafting my next book. But drafting for me is like standing at the edge of a sparkling pool on a skin-searingly hot August day in Texas, my home state. The plunge promises relief from the torpor, but the initial cold shock will be unpleasant and what if, what if, no matter how much I thrash about in the refreshment, I end up like Lady MacBeth? The story, like the spot, never really comes out. That’s what I fear. That’s why I procrastinate.

River Queens was borne out of a series of emails I sent while on the river, advising our progress to friends who were convinced that we had lost our minds in buying a rotten tub of a boat and launching her on a cross-country odyssey. Where we were supposed to lay over for retrofit for five weeks, we were delayed five months; where all our investments were secure, the Housing Bubble burst; where we had carefully laid plans, we found ourselves constantly having to jump from one made-up-on-the-fly Plan B to another; yet, we forged on.

The welcome we received on the river did not extend as far as Cincinnati, Ohio, our new hometown. Cincinnatians do not take in strangers as readily as those on the river had. In their defense, Cincinnatians’ first impression of us was never the landing of a meticulously restored forty-five foot yacht nor our subsequent emergence therefrom.

Dale, a professional church musician, fell in quickly with the local Episcopal cathedral. I casted about for several years until someone finally said, “Every one we know thinks you’re weird, and your behavior’s peculiar.”

Hurt and resentful of the time and effort spent trying to fit in apparently for naught, I sought comfort and solace in those emails from our journey. Readers still insisted that I write the book, six years on. But I am a reluctant writer, one well aware that writing a book because one composes an engaging email is like opening a restaurant because one sets a pretty table. I was intimidated.

I read anything and everything about the book business. I signed up for blogs and newsletters and any free come-on seminar I could find. I talked to any number of professionals about their services. I joined a writer’s group.

My first draft was dreadful. I persevered through multiple rewrites over one year until I finally had something I was willing to pour real money into. The film, Genius—about Thomas Wolfe, Max Perkins, and Look Homeward, Angel—indicated the next step.

I needed an editor, someone to teach me how to write beyond the ubiquitous recommendation of The Elements of Style. I assumed I needed a relationship like I had seen in the movie. I was mistaken. Along the way, I learned to query for a “conceptual editor” or a “developmental editor” which drew a uniform response:

“Do you know what that means?”

We had a regular table at the General Denver Hotel in Wilmington, Ohio where Mr. Baskin, my editor, standing order is a bowl of chicken soup, a side of steamed broccoli, and an iced tea splashed with cranberry juice to my fish, chips, and a diet Coke. His first notes were that River Queens‘s pace was too fast, the page overloaded, the style overwrought. I spent the hour-long drive back to Cincinnati wondering to myself, What the hell is he talking about?

His words were English applied in ways I had never heard before to a subject about which I knew nothing.

Nine months later, after extensive rewrites, but not wanting to be tempted by the work that had gone before, I threw that draft out entirely and began anew with a fresh piece of paper. That was Memorial Day 2017. The following Labor Day, Mr. Baskin was packing for his annual vacation to the Cape (Cod) and asked for some material to work on.

“I’m sending you all new,” I answered.

“All new?” he asked in disbelief.

It became the basis for the published work.

Once you had a draft, how did you go about getting it published?

To find an editor, I sent queries to all the contacts I had accumulated over thirty years of business and pleasure, asking each if they knew anyone even remotely qualified. The music director at a St. James Church in New York City had an editor from Random House in his choir. He made inquiries on my behalf.

“Tell Alexander,” the editor advised, “to get an agent. The agent will find a house. The house will supply the editor.” He added, parenthetically, “But I hafta to tell ya, self-publishing is eating our lunch.”

Besides, I could not rationalize the time, energy, and expense of recruiting an agent in order to give up all creative control.

Mr. Baskin works under the Orange Frazer Press imprint, a reputable and expensive vanity press, the natural choice because, like restoring a wooden boat and setting sail across country, I had no clue about producing a book except that I could not skimp.

Now that you’ve been through it once, do you have any advice or warnings to offer our readers?

I am always up for falling in love—“Damn the torpedoes!”

I know that you have done a lot to promote your book—and you even teach a class on book promotion. What are the 2-3 things you did that were most successful?

1) Promotion is nothing but knocking on doors. It is a brutally boring, repetitive, tedious, detailed work.

Fortunately, I have a childhood memory serves me well.

My grandmother and I were sending out fifth birthday party invitations to my kindergarten class. I balked at sending one to little Julie English. Julie English was a bitch even at five years old, and her sidekick, Betsy, was only slightly better. I did not want them at my party.

2) Coco Chanel famously quashed the debate on hemlines by saying, “Ladies, find your length and wear it.”

No one can sell a book like the author, but, as the author’s style must be authentic; so, too, must his or her promotion be authentic.

River Queens is memoir written like fiction, heavily dependent on word pictures; therefore, I promote it on radio/podcasts and in person because I speak well, I anecdote well, I think on my feet well.

If River Queens were a how-to, demonstrations on television may be best as Julia Child promoted The Art of French Cooking.

If River Queens were self-help, print or blog may be most effective for its anonymity, intimacy, and discretion.

In any case, the promotion forced upon the promoter ends in failure—always.

3) The independent, free-standing website is my most effective tool.

A website imparts credibility. The cost of the domain and web hosting, at least, testify to the author’s commitment to his or her craft. It is a qualifier for consideration by many influencers. It is a service to the community.

I built and maintain my own website, riverqueens.us, as a repository of all things pertinent to me as an author and my book. It is a digital scrap book containing reviews, interviews, honors, a sample read, pictures of the boat, of me, of Dale, of Doris Faye, a map of our route, links to Amazon and Goodreads as well as my video blog. (https://amzn.to/37q210J)

Unless I am at an event specifically geared for sales, I invite guests to visit my website rather than urging them to “Buy my book.”

I hear you are working on a new book. What do you do to stay focused, creative and productive?

I am reluctant about my next book. It is a portrait of my mother—which seems a bit cliché, you know, a fag and his mummy. But River Queens has generated a great deal of interest in the woman who raised the man who sacrifices everything in pursuit of a star.

The research keeps me motivated. I do not know anything about my subject beyond what a child knows about his or her parent. Research into the decades when Mother came of age, married, divorced, and went into business as a single-parent to support three young boys—the 40s, 50s, 60s, & 70s—in the segregated South provides plenty of material for the kind of layering that keeps River Queens from being just another mid-life memoir.

I am reading for voice. River Queens moves quickly because I was concerned, perhaps too concerned, about dragging the hapless reader into the abyss of all I know about boats, boat restoration, boating, rivers, river cruising, and the people one meets along the way. In all things I want to the book about Mother to read like a novel, leisurely and fully developed. It’s all about story.

For story, I read Anthony Doerr’s All the Light We Cannot See, Jeffrey Lent’s Slant of Light, Sebastian Barry’s Days Without End, Amor Towles’s A Gentleman in Moscow, Patrick Dennis’s Auntie Mame and Thomas Hardy’s Tess of the D’Urbervilles.

On my bedside table are Alexandra Horowitz’s Inside of a Dog and Sarah R. Phillips’s Modeling Life: art models speak out about nudity, sexuality, and the creative process. 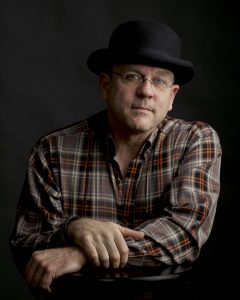 About the author. Alexander Watson is an entrepreneur, an adventurer, and author. He salvaged his family’s furniture business from bankruptcy, renovated derelict rental properties into Class A apartments; and restored a vintage motor yacht to its factory-new shine. In 2008, he sold it all to pursue a chance at life on the water. Watson’s book, River Queens: Saucy boat, stout mates, spotted dog, America tells of the extraordinary people found only on our nation’s rivers. Watson now lives in Cincinnati, Ohio with Dale Harris and a black standard poodle named Kohl. Visit him online at: https://www.riverqueens.us/