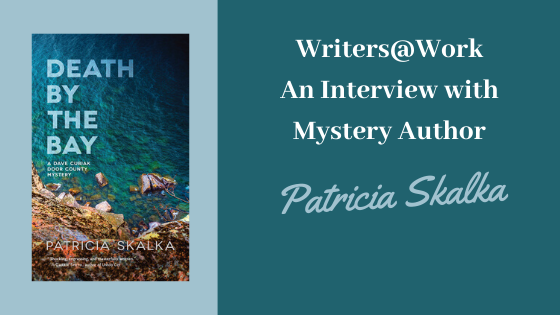 An Interview with Author Patricia Skalka

Welcome to the blog. Can you tell readers about your Dave Cubiak Door County Mystery series?

Of course, I love to talk about the books! Growing up, I read the standard mysteries, but it wasn’t until I got to Dorothy Sayers that I realized a mystery could do much more than solve a puzzle: it could provide insight into human character. That’s my goal in writing the Dave Cubiak Door County mystery series. As much as mysteries, the books deal with Dave Cubiak’s response to loss and grief and the killers’ ability to rationalize their actions.

Cubiak is burdened by grief and guilt over the loss of his wife and daughter. My hope is that readers can put themselves in his position and gain a better understanding of his struggles because they are the struggles that so many endure. I also hope that readers will ask themselves what they would do if they were in the killer’s situation. Murder is the most heinous crime imaginable. Perhaps, the more we understand the motivations, even as they play out in novels, the better equipped we are to prevent it in real life.

On a completely different note, I love writing about Door County, Wisconsin where the books are set. Door County, a picturesque peninsula with more than 300 miles of shoreline, juts out between the waters of Lake Michigan and the Bay of Green Bay. The area boasts a rich history, a wonderfully diverse geography, and a vibrant population of both year-round residents and seasonal visitors. When you combine all these elements, you have limitless possibilities for intriguing plots and interesting characters in the heart of the Midwest.

What prompted you to start writing the series? 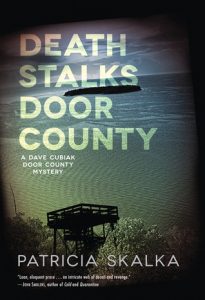 To be honest, I never intended to write a series! In fact, I was so intimidated by the idea that I never considered it. My background was in nonfiction writing. I wrote feature articles and had several nonfiction books to my name. The notion of series writing went against the grain of how I had worked for years.

When I started writing Death Stalks Door County, my first foray into fiction and my first mystery, I intended the book to be a stand-alone, one and done. I was about three quarters of the way through the first draft, when I started to realize that one book wasn’t going to be enough.

Everything about Cubiak was tied to his personal journey of redemption. It didn’t make sense that his inner story, his conflicts, would be neatly resolved by the end of book one. I had to give him more time, which meant I needed more stories, more mysteries to solve.

Luckily, as I was working on the book, new plot lines kept popping up, and by the time I was finished with my first draft I had one-page plot summaries for three more—one per season.

I thought I was being so clever. But that plan fell by the wayside pretty quickly. I was barely finished with Death at Gills Rock, the second book, before I had plot summaries for the fifth and sixth books. Soon I’ll start book seven. Will that be the last one? I don’t know yet.

But there will be a last book. It’s inevitable because the books move through time, bringing Cubiak closer to both the completion of his journey and the conclusion of his career as sheriff.

As a series writer, what are the benefits to returning to the same people and setting for each book? And what makes it challenging for you?

By now I know my characters so well that I’d recognize them walking down the street. That’s a good feeling, and it generates the kind of familiarity that makes it easy to write about them. I understand how they think and feel, how they talk, and how they will react in a given situation. Of course, there’s the danger of the writing going stale for all these same reasons.

Early on, however, I decided to move the books through time. Cubiak started off at age forty-two in Death Stalks Door County; in Death by the Bay, which was published last spring, he was pushing fifty-seven. This approach complicates the writing process but I think it also keeps the books fresh. Life changes for Cubiak and his friends and cohorts—just as life changes for us.

As a setting, Door County never grows stale. There is too much variety in the area for that to ever be a problem.

You teach writing workshops all over the country. What are some of the pieces of advice you give to your students that you can share with our readers?

Writing is both an art and a craft. One of my favorite craft workshops focuses on ten steps to better writing. The point to it is that no matter what we do, we can improve by following certain steps. No matter what we do, diligence and attention to detail are vital.

But writing is also an art. This means believing in yourself. It also means being humble and willing to accept suggestions and criticism. Every writer needs a critique group, but it doesn’t do any good to join one unless you are open to hearing what others say.

Ultimately, it’s your work and you decide on how it will be done. At the same time, you will benefit tremendously by daring to try different techniques and approaches. In one book I had a long flashback scene that took place entirely in the character’s mind. It was a memory – all internalized. A member of my critique group suggested that the scene would be stronger in dialogue format. Impossible, I thought. And to prove it, I wrote it in dialogue (which wasn’t that hard to do).

The result: it was better. Now, it might not have been, but I wouldn’t have known without trying.

The other advice I give to writers is very simple: read. Read all the time and as much as you can. Just as food nurtures the body, reading nurtures the mind. Reading stimulates the thought process and makes writing easier.

Interestingly, when I’m in the process of writing a Dave Cubiak mystery, I tend to not read contemporary mysteries. Primarily because I don’t want to be overly influenced by another author’s approach and technique.

While I was finishing Death Washes Ashore, book six in my series, I read The Dutch House by Ann Patchett—a marvelous character-driven story—and The Curious Incident of the Dog in the Night-Time by Mark Haddon, an intriguing tale and unusual narrator.

Now that I can turn to the stack of mysteries on my desk that are waiting to be read, I’ll start with Eight Perfect Murders by Peter Swanson. 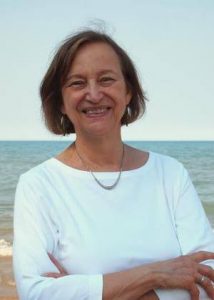 About the author. Patricia Skalka is the author of Death Stalks Door County, Death at Gills Rock, Death in Cold Water, and Death Rides the Ferry, the first four books in the popular Dave Cubiak Door County Mystery series. Skalka turned to fiction following a successful career in nonfiction. Her many credits include: Staff Writer for Reader’s Digest, freelancer, ghostwriter, writing instructor, and book reviewer. Visit her online at: http://www.patriciaskalka.com/

NOTE ABOUT LINKS: All of the books on the blog can be purchased at BOOKSHOP, an online bookstore supporting Independent bookstores. I will receive a small commission for any books you purchase from my shop: https://bookshop.org/lists/books-featured-on-the-write-now-coach-blogs