When I first read Jocelyn Koehler’s post, I was hopelessly behind the recommended word count and had been staring at my NaNoWriMo project on my computer screen for an hour, trying to figure out what to write next. After reading her post, I happily closed down my computer and headed to the library. The next day, I easily caught up on my word count. Are you yearning to know the secret technique that overturned my writer’s block? Read this brilliant post by Jocelyn and rejoice—writing can be fun! —Rochelle Melander, The Write Now! Coach 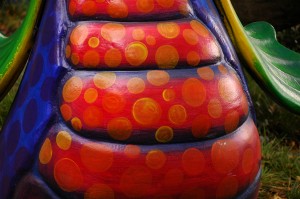 “Creativity is just connecting things. When you ask creative people how they did something, they feel a little guilty because they didn’t really do it, they just saw something. It seemed obvious to them after a while.” —Steve Jobs

It’s about halfway through NaNoWriMo, and if you’re like me, you’re probably wondering what insanity led you to agree to write 50,000 in 30 days, and how bad it would really be if you just gave up now.

But don’t give up! If you’re in a panic because you already wrote down all the ideas you had for your novel and you’re still nowhere near 50,000 (or even a coherent story), just breathe.

As Steve Jobs noted, creativity is just connecting things. And if you’re in a creative slump, all you need to do to get out of it is connect something new to what’s already in your head.

A while ago, I had come up with an idea for a YA novel in which the protagonist lives in a town that was essentially populated with werewolves. Interesting, but not enough. Why was the town so great for werewolves? I didn’t know, so the story just stalled. Then, one day, I happened to read a magazine article on tramp and hobo culture in the Depression. Lightbulb! Though I hadn’t worked on my YA story in months, I thought: “What if some of those tramps and hobos weren’t quite human? Maybe that’s how they all ended up in this little western town.” Suddenly, my protagonist had a history. I was off and writing!

Letting your brain draw connections between things that don’t seem related is the heart of creativity. So if you’re feeling stuck, give your brain some new fuel and then go take a nap. (And keep a notebook by the bed!)

Your turn! Here are a few ideas to get you going:

1. Listen to something new. Go to your favorite source for music, and pick an artist or band at random. Close your eyes and listen to three songs. Now stop. Write down whatever thoughts you had. Then write down what one of your characters would think of the music. What they say about the lyrics? Do the lyrics have something to say about your plot? Your setting?

2. Pick up a fact or two. This doesn’t mean “read Wikipedia for the next eight hours.” Just wander over to your local bookstore and leaf through a magazine or nonfiction book that’s outside your usual fare. Read an article or a column. Don’t take too long, and don’t worry about relevance. Just see how your thoughts wander. In a few days, what you’ve learned might very well show up in your novel without your even thinking about it.

3. Draw a map. Or a portrait. Or whatever. Just do something creative that isn’t writing. And, preferably, not something you do well. Just get out a pencil and paper (or knitting needles, glass paint, etc.) and make something. It won’t look good. And it doesn’t have to. Just using a different part of your brain will let the writing areas of your brain rest. Chances are, when you come back to the writing desk the next day, you’ll be thinking in a slightly different way, which will help you get past a block!

4. SLEEP! I’m not kidding. NaNo participants (and writers in general) love to talk about caffeine and self-medicating and how they can’t sleep like normal humans. But sleep is a beautiful, restoring, creative thing. So don’t push yourself to write when you can’t keep your eyes open. Put down the pen, turn off the computer, and step away. Sleep. Dream. Let your unconscious work on your novel for a little while. Then wake up. And get writing!

Share your ideas for letting your brain connect the dots below!

About the Author. Jocelyn Koehler grew up in the wilds of Wisconsin, but now lives in a tiny house in Philadelphia that is just big enough for two humans, a cat, and a snake. She is a freelance editor and indie writer. You can see her published work by visiting Hammer & Birch, and follow her more random musings at the oddly named blog Team Blood. At this very moment, she is typing away frantically at her NaNoWriMo novel.