Whether you are a professional writer or a NaNoWriMo newbie, at some point writing begins to feel like a day job. You know what I mean, you’re showing up and turning in the words, but the work does not challenge or excite you anymore. You need to try extreme writing. Read on as our daredevil guest blogger Stephanie Kilen challenges you to some terrifying writing exercises. —Rochelle 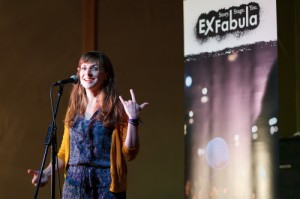 I recently heard an interview with Lynda Barry in which she passed on a tidbit that someone had presented to her: “Draw what you can’t.” She said she can draw a chicken laying an egg until the cows come home but had no idea how to draw a soldier in combat. Hemingway had a similar suggestion: “Write hard and clear about what hurts.” I don’t think that necessarily means writing about trauma, but the point is more that we need to really stretch ourselves, experience things that are not easy for us, to get at some really good stuff we may not know we are capable of.

A few years ago I stumbled upon just such an opportunity through Ex Fabula, a Milwaukee arts organization in which folks get up on stage and tell true, personal stories without notes on a chosen theme. The thing about Ex Fabula, as compared to The Moth however, is it seems to be a bit more organic in that it is real people telling their stories who are not necessarily “storytellers” or writers. It also has a great sense of community and sense of place in Milwaukee that frankly makes my heart burst. The first time I saw a show I knew I wanted to be involved in the organization, but I was sure that it would be from the keyboard, not the stage. After of couple of years of writing for the blog and promotions, however, I got caught up in the magic and the challenge of telling a story on the fly in just five minutes. I got myself up there and told my story of meeting Michael Ondaatje and my incredible book dorkdom.

It was terrifying and exhilarating and perhaps the most fun I’ve had putting a story together. Having spent most of my life as an adult paying the bills by putting one word after another after another, I often feel I can put a 500-1000 word story together in my sleep (and some of them read that way). I avoid writing in the first person, and have never published anything personal (save my Facebook status) let alone revealing. A lot of writers make their living on this stuff and it comes easily. A lot of people are extroverts and are right at home talking to a group of people. I am so not that writer or those people. But I somehow knew that it would be one of those experiences where I would learn so much in five minutes that I could never learn in aWisconsinwinter of holing up in my house with my dog and laptop in my pajamas. So, I did it. And this is what I learned:

*Composing on the fly and with parameters (with at least an idea of what I was going to talk about, I had of course told this story to close friends after it happened) really helps you get down to the good stuff of the story. The “good stuff” is both the important plot points and the juiciest of details that do the best job pulling in the reader. It also doesn’t leave your inner editor/monkey mind/naysayer time to interject or judge you. That’s pretty liberating.

*Telling a story out loud and writing a story, even the same story, bring out very different voices.

*Jumping in the deep end can help you get to a new place, perhaps not scary or extreme, but certainly more interesting than the place you’re used to and can even make you see the shallow end from a new perspective.

After the experience, when I got back to writing my novel and even the more mundane stuff, I felt fresh for the first time in years. I incorporated some elements I discovered in my storytelling style into my writing, had more confidence having made the leap and was better at holding back the inner editor until I needed her so that I was free to be more creative.

Writing Prompt: Extreme Writing Put on your helmet and wrist braces. Try something a little terrifying for 5 to 10 minutes. Don’t think too much, just keep writing. You could:

*  Write the thing you really don’t like to talk about

*  Take a scene from your own writing, even a few paragraphs of non-fiction, and put a genre spin on it

*  Write out loud instead of on paper (Yep, speak it to the empty room or your pet.)

*  Or come to an Ex Fabula event and throw your name in the hat to tell a story.

About the author: Stephanie Kilen has been lucky to hone her craft in newspaper, magazine, PR, script, educational materials, ads and all the other little random stuff out there that needs someone to put some words in order. She is currently in love with and working on writing a novel.