Are you ready to NaNo? If not, I can help! Next week, I’ll be welcoming Angela Ackerman to the Write Now! Mastermind class to talk about Character Creation: Forging an Unforgettable Hero. We’ll meet next Wednesday, October 23, 2013 at 12:00 PM CDT (Think Chicago) to talk about building great characters. If you’re not yet signed up, you can do so here.

And, to whet your appetite for the class, read Angela’s blog post and enter to win an ecopy of one of her three remarkable books on character traits (see below)! 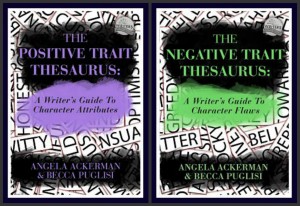 Crafting a complex and unique protagonist is no easy feat. To really make readers care, we need to dive beneath the surface when it comes to personality. Like real people, characters need flaws as well as attributes. Negative traits trip the protagonist up, creating friction and damaging relationships, all the while skewing his view of the world. This conflict makes for great reading!

Flaws aren’t all bad of course, because they also humanize the character to the audience. Readers have faults just like anyone else, and know what it’s like to make mistakes and have those “not-so-proud” moments. Flaws help characters come across as relatable and provide one of the most important elements of character arc: the opportunity for self-growth.

Self-growth happens when new experiences give the protagonist better insight into who he is. Perspective encourages his strengths to emerge, overpowering the flaws that hobble him, keeping him from reaching his goal. So while flaws are important, positive attributes are key to the protagonist “winning” the day.

Attributes help a protagonist make difficult decisions, face fear or danger, and find the courage to strive for fulfilment. The desire to grow and achieve happiness is universal, so readers are drawn in by characters fighting for this very thing. Choosing the right strengths when it comes to character creation is what provides a “hint” of greatness that promises the reader, this hero is someone worth rooting for.

When it comes to forming likeable protagonists, attributes are King. And this is where things get difficult, because there are hundreds of different positive traits to choose from. How do authors decide which attributes are right for their character?

Character Creation is all about brainstorming who a character is and what makes them tick. To build a well-rounded protagonist, it’s important to choose attributes that will make him authentic, realistic, and able to navigate his world. A great starting point for choosing a character’s strengths are these four Attribute Categories:

MORAL ATTRIBUTES: moral beliefs are at the core of each of us, determining our actions and decisions in our world. We naturally assign a moral “weight” to everything we do and see, and so must our characters. Choosing traits that closely align with what a character believes to be right and wrong is the foundation of their personality. Kindness, generosity, responsibility and loyalty are all examples of moral traits. Think about what beliefs your character holds dear and choose a trait or two that specifically line up with his morals.

ACHIEVEMENT ATTRIBUTES:  all characters are driven to meet their own cardinal needs and achieve goals that matter to them. Achievement-based attributes should align with the character’s moral beliefs but their main function is to help the character succeed. Examples might be resourcefulness, focus, efficiency, and perceptiveness. List out the big goals your character has, and then identify which positive traits will help him achieve them.

INTERACTIVE ATTRIBUTES: the way a character interacts with other people and his world is important. Being that humans are social creatures, relationships play a big part, and will matter to your character (whether he wants to admit it or not!) Traits like diplomacy, honesty, courtesy, hospitality or friendliness might be attributes a character would adopt to form healthy interactions. Think about how your character acts towards others and how he ensures the relationships he needs are functional.

IDENTITY ATTRIBUTES: each person (and therefore each character) is on a journey of self-discovery. Identity traits help your protagonist express who he really is, and what he believes in. Patriotism, curiosity, extroversion or introversion, idealism, quirkiness and a sense of adventure are all traits that promote greater individuality and personal expression. Identity attributes are a great way to make your character stand out as unique!

Choosing traits with these categories in mind is a good starting place for building interesting and relatable characters. Try different attributes on for size until you find a mix that feels just right! For an extensive list of positive attributes, check out The Positive Trait Thesaurus.

Your turn: How have you used traits to build unforgettable characters? What novels have characters with notable traits? 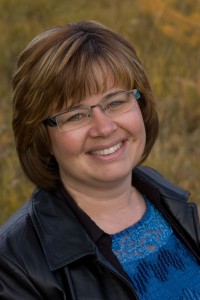