Welcome, writers. Today’s post comes from a recent journalism school grad. In it he offers his top five—what he learned about writing from school! Chime in with your top learnings! —Rochelle, the Write Now! Coach 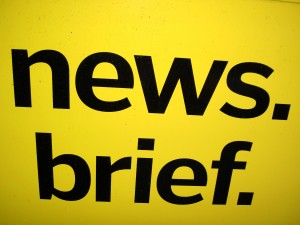 What Journalism School Taught Me About Writing

As a young, aspiring (mostly) online journalist fresh out of college, I am finding it increasingly important to remember what I learned from the journalism courses I took. While it’s impossible to wrap up every single bit of information into one article—or even several—I aimed to present the five lessons that I learned about news and feature writing that have stuck with me the most. In an increasingly competitive market for writers, I’ve found that it’s most crucial to at least have these skills in my back pocket.

Develop a Voice. First and foremost, I learned that I needed to develop a voice within my writing. This may seem difficult at first and, yes, it most certainly is. However, it is simply something that came with writing until my hand fell off—hypothetically speaking—until I became even slightly comfortable enough for my voice to breathe through my work. I personally don’t think I’ve quite honed my own approach just yet, partially because I feel as if I’m slightly harping on the works of the greats. But still, that’s not a terrible way to start, and it’s actually one of the tips I learned from my professors. After all, as T.S. Eliot once said, “Good writers borrow, great writers steal.”

Always Be Prepared If there’s one thing I cannot stress enough, it’s being prepared. This became devastatingly apparent for me during one of my internships in college. I was assigned to cover several meetings in the town nearby my university and report on the most important issues discussed. The first two went just fine as I showed up with my notepad, pen, and trusty voice recorder. But on my third assignment, I thought I’d try going the digital route and bring my tablet along to jot down my notes. To be sure, I failed somewhat miserably.

Keep It Simple (Stupid) I can remember it like it was just yesterday, sitting in a 300-level journalism class and hearing my professor proclaim, “You’ll need to write for an 8th-grade reading level.” Instantly, the English degree-earning side of my tried to reject that knowledge, but I couldn’t. The idea of keeping it simple struck me most strongly when I began reading newspapers like USA Today and others of its ilk that work to keep their articles tight and concise. I also realized that they don’t tend to be verbose or reach for their Thesaurus whenever they want to spice up an article. Why? Because reports like this one by the L.A. Times prove that literacy simply isn’t as strong as it once was.

Diversify Your Skill Set In starting out as a journalist, I’ve learned that I cannot diversify my skill set enough. Basically what that boils down to is that I needed to be a jack of all trades (of sorts) and willing to tackle nearly any number of topics thrown my way. In my experience covering small-town politics, both in my internship and now as a freelancer, I’ve had to report on so many different subjects that I have basically lost count. From school committees to planning boards to parks and recreation and everything in between, I have been expected to have a sense of what’s going on throughout the community to which I’ve been assigned.

Follow the Rules, But Not Too Closely. As an avid AP Stylebook follower, I am pretty much never without that book by my side. I have learned and continued to study the ins and outs of AP style, meaning that I spend at least 20-30 minutes every day flipping through it to stay fresh. But when it comes to actually writing my articles, I have found that I do not absolutely have to stick to what I have learned from my college professors. I haven’t allowed rules to undermine my voice or restrict what I’m actually writing about. If there has been a time where I feel as if a more loosely structured approach could portray the subject in a different and more interesting manner—this is important for weekly paper reporters like me—I have learned not to become afraid to pitch it to my editors. They have said no before, but they have also respected my willingness to be a touch more creative.

About The Author: Kevin Gannon is a recent college graduate with an English degree. For those wondering, he minored in Journalism and just so happens to have a strong passion for reporting on news of any kind and for any outlet. As a young writer, he’s learning that it takes time to hone your chops, and you can never branch out too much.