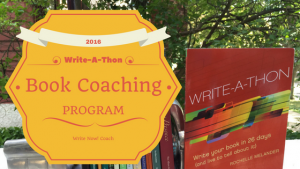 Are you thinking about writing a book this fall? Or hoping to finish that book you started early in the year? Let me help you overcome procrastination and fear! Join my Write-A-Thon Book Coaching Program, starting October 10th. This course will give you the opportunity to learn how to write a nonfiction book AND get the support you need to do it! There are only a limited number of spaces for the Gold and Platinum levels, so sign up soon. Visit my Write-A-Thon Book Coaching page to learn more. 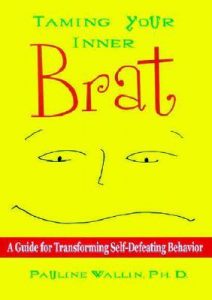 Today’s tip is an extraordinary interview with Dr. Pauline Wallin, a psychologist who specialized in helping procrastinators overcome their anxiety and write. She’s the author of Taming Your Inner Brat: A Guide for Transforming Self-Defeating Behavior. Read on!

An Interview with Dr. Pauline Wallin 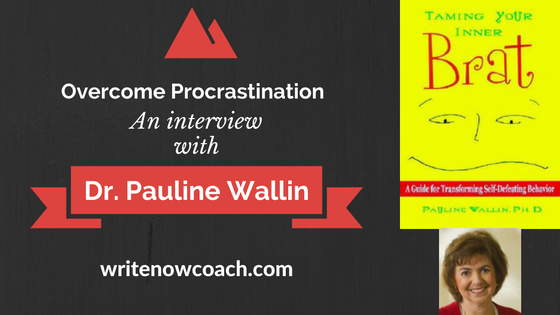 I met Dr. Pauline Wallin on a site dedicated to the study of Positive Psychology, and was curious about her work with people who procrastinate. She graciously agreed to an interview with me—and here it is. Listen and learn—Dr. Wallin has much to teach us!

WNC: I know you’ve helped a lot of people who procrastinate. What’s your experience with procrastination?

PW: There’s a quote, attributed to author Rita Mae Brown: “If it weren’t for the last minute, nothing would get done.” If you’re smiling as you read this, it’s because you recognize that procrastination is a universal phenomenon.

People often poke fun at themselves for procrastinating, but it can be a serious problem that often leads to missed opportunities, financial loss, emotional stress, poor self-esteem and other other troublesome conditions.

WNC: In your talks, you talk about why we procrastinate and mention a few things about what procrastination is not. I think hearing this might help our hearers forgive themselves. Can you share some of these?

PW: 1. Procrastination is not a biological trait. There’s no procrastination gene. If everyone in your family puts things off until the last minute, it’s due to two main factors:

2. Procrastination is not caused by laziness. To the contrary, most people who procrastinate view themselves as conscientious. They spend a lot of time thinking about what they have to do, and often feel guilty for not acting on their good intentions.

3. Procrastination is not a problem with planning or scheduling, nor due to a lack of time. That task has probably been on your mind for a while, but you keep putting it off. Finally, as the deadline approaches you may feel pressured by time, but that’s only because you chose not to act on it sooner.

4. Procrastination does not indicate a lack of respect for others. You may have high respect for a friend or a colleague, yet still delay doing something that they need from you. Even though you acknowledge that someone is waiting for you to complete a task, and even though you can list several reasons why you should get to it, your resistance is so self-focused that it wins out.

WNC: As a psychologist, you also have looked into why we procrastinate. Why do we put off the tasks we really want to do, like getting to work on our books?

PW: The main emotion underlying procrastination is anxiety. When thinking about sitting down to write, you start to feel tense or anxious. That’s normal. Now the logical next step would be to get started, because you know you’ll feel better afterwards.

However, it’s much easier and more convenient to promise yourself you’ll do it later – which makes you feel better instantly, without lifting a finger!

Unfortunately, that sense of relief lasts only a short time, because you have to face your lack of productivity over and over again – each time feeling a bit worse about the task and about yourself. Eventually there’s no relief at all, and you end up feeling defeated. 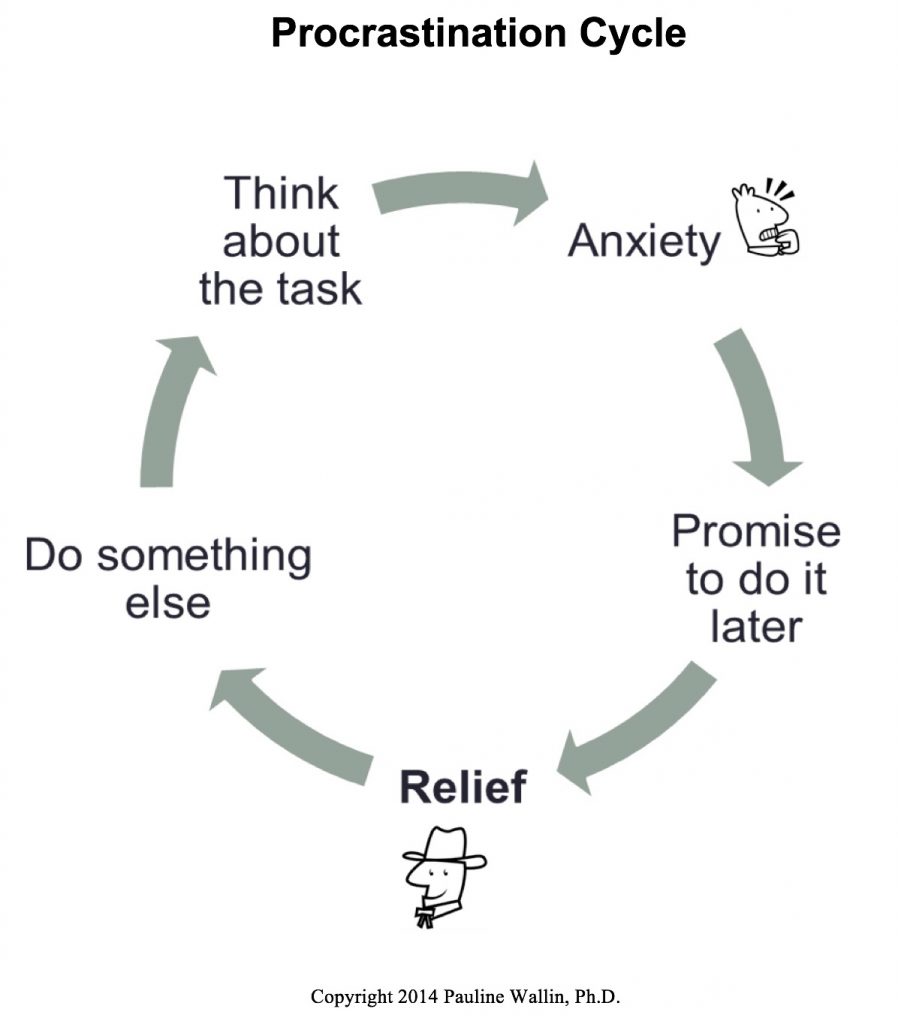 In an unconscious attempt to preserve your self-esteem, your mind plays tricks on you to legitimize procrastinating on a task. I like to think of an “inner brat” in the back of your mind, who tries to convince you that you need more time, or that you don’t have the right tools, or that you need to do some more research before getting started. These are merely rationalizations. They may sound logical, but most of the time they don’t really prevent you from getting started.

When you promise yourself to start writing “this weekend for sure” or “Monday morning for sure,” you can still feel conscientious, But it’s just another tactic from your inner brat to avoid facing the hard work.

WNC: So is there an upside? Something we get out of procrastination? I know Adam Grant recently wrote about how his habit of pre-crastination had stifled his creativity. Just as many procrastinators have told me that they get a lot more creative when working up to the deadline. So what does procrastination give us?

PW: The studies he described in his New York Times article were about delaying activities under instruction. That’s different from the mindset of most people who procrastinate. Procrastination is an impulsive decision, motivated by internal discomfort. Deliberately interrupting a task despite wanting to continue is something entirely different.

As for the creativity part, when someone says, “I do my best work under pressure,” it’s probably because they do most of their work under pressure. Delaying per se does not make you more creative. Putting off a creative task does allow more time for ideas to swim around in your mind and incubate. But it is only when you start to focus that your creativity actually kicks in. When working against a hard deadline, focus helps with creativity only up to a point. The anxiety from time pressure can cause you miss creative connections that would occur to you in a less stressful mindset.

WNC: What are some of your secrets for overcoming procrastination? Let’s start with the psychological: how do we beat the mind game?

PW: Procrastination is a self-reinforcing habit that serves to reduce emotional discomfort when faced with a complex or difficult task. Remind yourself that putting it off brings only temporary relief. Challenge yourself to go for the long-term benefit. That means you’ll have to tolerate some discomfort for a few minutes, but you’ll ultimately feel better for doing so – just as you feel better when you resist the immediate gratification of junk food.

Anticipate that your “inner brat” (which hates any inconvenience or discomfort) is going to try to talk you into doing anything BUT the project you promised yourself you’d work on. Treat it as you would a toddler who whines or argues. If ignoring doesn’t help, remind your inner brat that you (your adult, rational self) are the boss.

WNC: Now what about action tips—how can we actually get writing?

PW: First, make a non-negotiable decision to write at a specific time, in a specific place. No rationalizing, no bargaining allowed.

When the time comes to sit and write, approach it with an attitude of “I will,” rather than “I have to.” It’s a small change of words, but it makes a big difference in cutting through your resistance.

Remove distractions. Turn off the alerts on your phone. Close your email program. Unplug from the internet if necessary.

Clear your work space. This is not the time to organize your desk (which would be another procrastination tactic) but rather to just move clutter out of sight, to help you feel calmer.

Commit to writing for 15 minutes. Start by writing what comes easily to you. If it’s only sentence fragments, that’s fine. Don’t feel compelled to start at the beginning of a chapter or article, nor where you last left off, especially if you feel stuck. Anywhere you begin will contribute to the end result.

Why 15 minutes? I’ve found from my own experience and from most people I’ve worked with professionally, that during this 15 minute period of writing, much of your anxiety will dissipate, and you can keep going with less effort. That’s why I call it “15 magic minutes.”

WNC: Do you have a final piece of wisdom to offer our readers?

PW: Be mindful of how you talk to yourself about your procrastination. Avoid labeling yourself in negative terms, as that will make it even harder to break through your anxiety.

Assume that your first draft will be far from perfect, and that polishing it in stages is integral to the process. In her book, “Bird By Bird,” Anne Lamott advises writers to start with a “shitty first draft.” She notes, “All good writers write them. This is how they end up with good second drafts and terrific third drafts.” By setting low expectations for your initial effort, you reduce your anxiety and have greater access to your creative ideas.

Train yourself in a new, non-procrastination habit. As with other training, it requires practice. Opportunities to practice your new habit are all around you – that stack of mail, those clothes in the hamper, the stuff on the kitchen counter… Take advantage of such opportunities. Just doing one small task you’ve been putting off can give you an instant emotional lift.

Pauline Wallin, Ph.D. is a psychologist in central Pennsylvania, working with individuals, couples, families and businesses. She is author of the self-help book, Taming Your Inner Brat: A Guide for Transforming Self-defeating Behavior, and has written dozens of articles on how to apply psychology to everyday life. 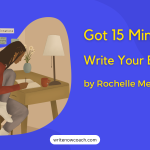