My birthday special class was so much fun, I decided to offer it again. If you struggle with procrastination, come to my class Procrastination Proof Your Writing Life. This class will support you in taking the steps you need to overcome your procrastination and write more. Sign up at the Workshop Page.

Today I am delighted to welcome children’s book author Dean Robbins to the blog to talk about his new book, The Astronaut Who Painted the Moon. Robbins will appear at Boswell Book Company TONIGHT at 6:30 PM. If you live in Milwaukee and love kid’s books—you won’t want to miss it! 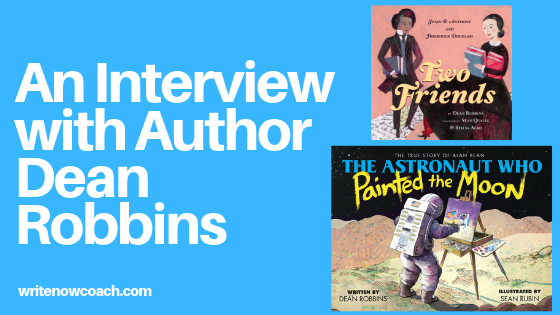 Writers@Work: An Interview with Dean Robbins

What’s your new book about? 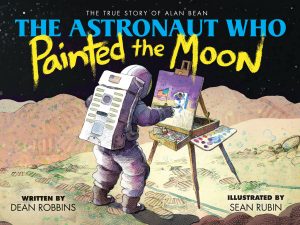 The Astronaut Who Painted the Moon: The True Story of Alan Bean (Scholastic) is about the only artist to fly into outer space. Alan Bean was the fourth person to walk on the moon with 1969’s Apollo 12 mission, as well as a talented painter inspired by Claude Monet. He devoted his post-NASA career to making art that expressed how it felt to travel to another world. I had a chance to collaborate with Alan on the book—a dream come true for an astronaut-lover who grew up in the heyday of the Apollo missions. He never won the acclaim of Neil Armstrong or John Glenn, despite his unique contribution, but I hope The Astronaut Who Painted the Moon brings him more attention on the 50th anniversary of the first moon landings.

You are a journalist and editor. How did that prepare you for writing books for children?

Like nonfiction children’s authors, journalists research complicated topics and write about them for a general audience. The process of creating a newspaper article and a book like The Astronaut Who Painted the Moon is similar: interview the subject, digest all the background material, find a compelling angle, and incorporate the story’s dramatic elements into an effective narrative structure. 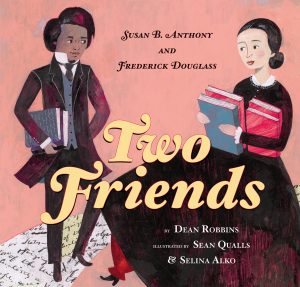 Journalists like to leave their desks to experience what they’re writing about, and that can be valuable for children’s books, too. For Two Friends: Susan B. Anthony and Frederick Douglass (Scholastic), for example, I traveled to Rochester, New York, to see where the two civil rights champions forged their personal connection. Walking in their footsteps helped me evoke a sense of place in the story.

How did you get started writing nonfiction picture books for kids?

I’ve always admired certain historical figures and immersed myself in their lives. They include artists who deeply move me, like Louis Armstrong and Emily Dickinson, and activists who greatly inspire me, like Susan B. Anthony and Frederick Douglass.

My interest in such extraordinary people led me to a career as a journalist, interviewing the likes of Ella Fitzgerald, Robert Redford, and Yoko Ono. One day I realized how gratifying it would be to share my heroes’ stories with young readers. Introducing students to role models like Alan Bean—and seeing their faces light up with curiosity and awe during my school visits—is a dream come true. I hope these stories compel them to follow their dreams and make the world a better place.

When you are considering new book ideas, what are some of the signs that you’ve landed on the perfect project for you?

It usually starts with a chance discovery. With The Astronaut Who Painted the Moon, I was reading an article that included profiles of all the astronauts who’d been to the moon. Their stories were similar—until I got to Alan Bean’s. I was fascinated by his interest with visual art and couldn’t believe I’d never heard about it before. I wanted to learn more, so I read Alan’s own accounts of painting outer space. Then it occurred to me: This would make a wonderful children’s book. The story started to take shape in my head and flowed easily onto the page. That’s the sign of a perfect project for me.

Any advice for writers who would like to write nonfiction picture books for kids?

I’d encourage writers to find subjects they’re passionate about, rather than thinking too much about the market. It’s easy to tell when a writer is going through the motions with a marketable topic: the story tends to read like a Wikipedia entry. Writers who truly connect with the material are more likely to bring out the dramatic potential of a remarkable life or a historical moment. I think young readers—as well as agents and editors—can spot the difference between an emotionally resonant tale and boilerplate. Creating the former requires extensive research, long reflection, and rigorous polishing to find the right tone and approach for elementary school students.

I love biographies that do justice to a subject, placing a life in a larger historical context. As always, I’m reading several at once: Prairie Fires: The American Dreams of Laura Ingalls Wilder by Caroline Fraser; John Lennon: The Life by Philip Norman, and Louis Armstrong, Master of Modernism by Thomas Brothers. These books set a standard for masterful nonfiction writing that I’d love to reach myself. Maybe one day. 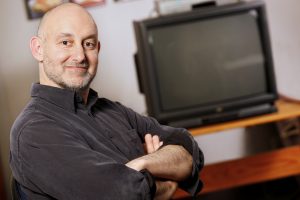 About the author. Dean Robbins is a journalist and the author of the children’s picture books Two Friends: Susan B. Anthony and Frederick Douglass, Margaret and the Moon: How Margaret Hamilton Saved the First Lunar Landing, and Miss Paul and the President: The Creative Campaign for Women’s Right to Vote. His award-winning books have received starred reviews in Publishers Weekly and Kirkus Reviews and been praised in the New York Times and USA Today. Dean grew up idolizing Apollo astronauts and loved working with Alan Bean on The Astronaut Who Painted the Moon. Learn more at deanrobbins.net.