Last week, I attended my first in-person book signings in 2 years. The first was for Kelly Barnhill, who read from her new book, The Ogress and the Orphans. She told us that she rewrote her Newbery Award winning novel, The Girl Who Drank the Moon 100 times.  As she said (and I paraphrase), I tell you this to free you—don’t worry so much when you write. Just play with words.

The second book signing was for my friend Maggie Smith’s debut novel Truth and Other Lies. I was impressed to hear how hard Maggie worked to write and publish her book. This woman earned a PhD, worked as a journalist, therapist, business owner—and said that writing novels is the hardest job she’s ever had. You can read about her amazing journey to publication in last week’s blog post.

Do you ever think—if I could just reinvent myself, then I could do big things? Maybe you can. My friend and colleague, author Damon Brown, is here to talk about his new book, Career Remix. In it, he shares how you can use your brilliance in new ways.

And if you don’t feel like reading the interview, watch Damon talk about his answers on his TV Show.

Writers@Work: Honor Your Worth

An Interview with Damon Brown

Welcome to the blog, Damon and Congrats on the book. Can you tell us about Career Remix?

Thanks for having me. Career Remix: Get the Gig You Want with the Skills You’ve Got is a blueprint for two types of people: Folks who have left their job in The Great Resignation and folks who are keenly interested in building the next leg of their career beyond their current 9-to-5. In both cases, I hope I show the value you have in your experiences thus far—even in your so-called failures—and all the treasured skills you’ve gained that can be applied to your next act.

I was impressed by how your book spoke to me, even though I am an entrepreneur. What are a couple of tools and strategies in your book that you think work for freelance writers and speakers?

Thank you, Rochelle! I coach entrepreneurs and am an entrepreneur myself, and I was keen to take some of our tools and share them with other creatives. First, you need to know your runway. Like the strip for a plane taking off, your runway are the resources (particularly financial) you have shored up to take care of you before your business path takes off. For instance, if you have $4,000 saved up from your previous or current business, and your expenses are $1,000 a month, then you have a four-month runway. So many people I coach have a brilliant idea and want to quit their job immediately! I’m sure you’ve had similar conversations with your coaching clients, too, Rochelle. I encourage them to think long-term and recognize that independent work, from founding a startup to building a speaking career, will ebb and flow. Make sure your resources are in order.

Second, aim for the minimal viable audience. In Silicon Valley, we talk about minimal viable product, or MVP, which means creating your best product using the least amount of material while satisfying the audience you serve. You can then get feedback from the audience and refine the product, hopefully with more resources available later. Minimal viable audience is similar: Who is the ultimate person you want to serve? Just talk to them. I began focusing on what I call non-traditional entrepreneurs: Side hustlers, solopreneurs, independent creatives. My earlier books and speaking engagements just spoke to them. It has since expanded to people transitioning within a 9-to-5, as shown in my latest book, Career Remix. But my core audience is still being served.

I know you have an independent publishing company and this book is from Union Square and Co. (formerly Sterling). Can you talk about how you juggle indie and traditional publishing? Also, what advice do you have for writers who want to do both?

Oh, I can talk about the difference for hours! There are two big keys to understanding indie.

First, you have to know the system: I did 18 traditional books before my first big book on my Bring Your Worth indie line, The Bite-Sized Entrepreneur, and the whole time I was listening and connecting with agents, editors, and even publishers to better understand the business of the business. Going indie means hiring a cover designer and an editor, knowing how your books will be distributed, coming up with marketing plans months in advance, and other details traditionally published authors may assume just happens. You want to have a direct path to your audience, too, well beyond social media. When Career Remix was announced, I shared it to my JoinDamon.me newsletter group as well as doing a trailer for my #BringYourWorth TV show. Those are channels I’ve built over time without the presumed support of a big publisher.

Second, as an indie, you’re funding everything! Traditional publishers will give you an advance technically designed to keep you fed while you work on the manuscript. You then pay back the advance through sales of the book, and once it is paid off, then you start receiving royalties. As an indie, you are paying your own advance to yourself. From 2016’s The Bite-Sized Entrepreneur to 2021’s Build From Now, I funded my book projects through my freelance journalism, coaching practice, and speaking engagements. The upside is that I paid any consulting book designers and such up front, so I was in the black shortly after the books launched. My best-seller The Bite-Sized Entrepreneur is still a steady seller, so I’m getting royalties based on hard work I did years ago – and my cut of the cover price is much higher since I own the publishing company.

One last note: If you do want a traditional publishing deal, then doing well independently can help you negotiate. Union Square and Co. offered me a good deal because I had two best-selling books independently. It trusted I knew my audience, how to reach them, and what they needed at this very moment. There’s nothing wrong with creating your own path and, I would argue, you shouldn’t be too dependent on a publisher to get you to your desired audience.

You juggle a lot of roles, including writing and parenting. What are some of the strategies that help you get writing done?

My biggest strategy is focus! Once a day, I will take an index card and write down the 3 must-dos of the day. It’s harder to narrow down than it seems! Once I do, though, then I am super clear on my priorities. I am primary caregiver for my and my partner’s 8 and 5 year old boys, have my private coaching practice, do my #BringYourWorth show every Monday, Wednesday, and Friday, and more. I absolutely have to let go of things that may seem urgent but aren’t important.

The real secret? Your to-do list is never done. Plan in rest and health as if your creative life depended on it. Because it does. 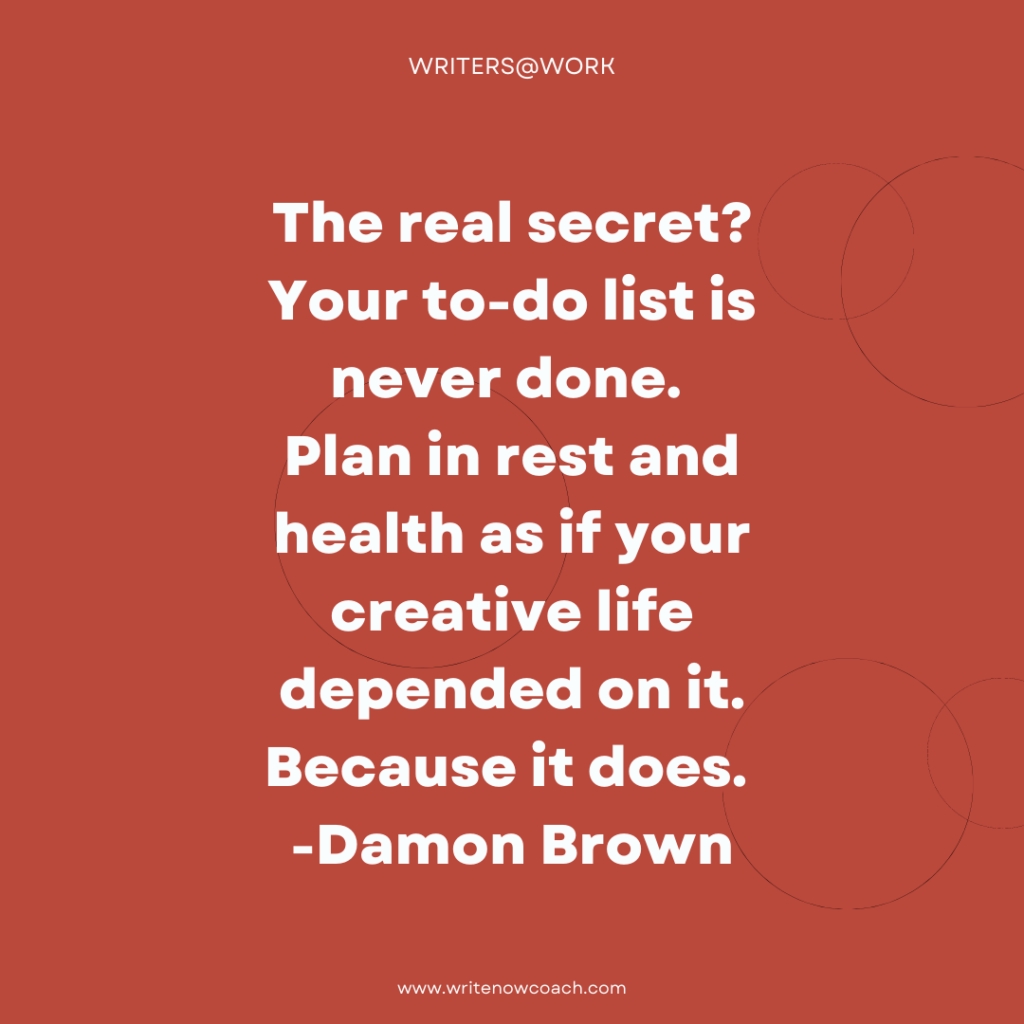 Two books: Rereading No Mud, No Lotus by Thich Nhat Hahn. He was a pacifist monk who Martin Luther King, Jr., looked to for guidance. I’ve loved and cited his work, particularly in my previous book Build From Now, and he passed away earlier this Winter. I miss his influence.

I’m also reading Black Software by Charlton D. McIlwain. He is a professor who studied the history of black-led startup entrepreneurship. Oh, how I wish this book existed when I founded my two startups almost a decade ago! Being a rare Black founder actually encouraged me to write my breakout book The Bite-Sized Entrepreneur and, later, to begin coaching non-traditional entrepreneurs after I sold my startup Cuddlr. I’m devouring the book as we speak. 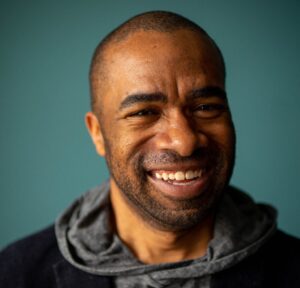 About the author. Damon Brown (damonbrown.net) helps side hustlers, solopreneurs, and other non-traditional creatives bloom. A best-selling author and 4x TED Speaker, Damon co-founded the popular platonic connection app Cuddlr and led it to acquisition within a year, all while being the primary caretaker of his infant first son. He now guides others through his consulting/coaching (www.damonbrown.net), M/W/F #BringYourWorth show (www.youtube.com/browndamon) and long-running Inc. Magazine column (incdamonbrown.com). Damon is author of the best-selling series The Ultimate Bite-Sized Entrepreneur and his most recent, Build From Now: How to Know Your Power, See Your Abundance & Nourish the World. You can now get his new book, Career Remix: Get the Gig You Want with the Skills You’ve Got, take his free best creative resources quiz at http://www.buildfromnowquiz.com, and subscribe to his free #BringYourWorth show at http://youtube.com/browndamon?sub_confirmation=1.