I devour memoirs. My shelves are stacked with the life stories of people who successfully survived brain tumors (I Had Brain Surgery, What’s Your Excuse? by Suzy Becker) and raised chickens in their yard (Still Life with Chickens by Catherine Goldhammer). Imagine my delight when I met another memoir addict! I’m thrilled to welcome Peggy Riley Thomson to the blog to talk about her favorite read: memoirs. And as an added bonus, Peggy has offered an amazing giveaway: she is willing to read and critique a 500-1000-word excerpt of one of your memoirs. If you’re interested in entering the contest, all the details are at the bottom of the post! The contest runs through August 31 and the winner will be announced the first Tuesday in September. 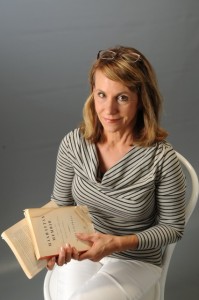 As a journalist I’ve always been drawn to true stories, even during my off time. You’d think I might chose fantasy or science fiction or some other form of literary escapism every once in a while, but I don’t. No, those genres just aren’t me. You see, I am, and probably always will be, a true memoir junkie.

My addiction began more than fifteen years ago, around the time I started writing book reviews for The (Memphis) Commercial Appeal. At the time, memoir as a genre was already receiving unprecedented attention, partly as a result of the publication of Angela’s Ashes, a remarkable childhood memoir written by a hitherto unknown schoolteacher named Frank McCourt.

Coming up with a handful of favorite memoirs is a difficult−if not impossible−task. Instead of focusing on the newer releases, I’ve decided to go with a few older titles you may have forgotten about or possibly never even heard of. Some are only a few years old, while others date back to the mid-90s, when the tidal wave of memoirs we have today first began rolling in.

But first of all, for those of you who might be unfamiliar with memoir in general, I’d like to recommend Tristine Rainer’s Your Life As Story, long considered the definitive work on the subject. Rainer−whom I am fortunate enough to have studied with−equates writing a memoir to cutting a single slice of strudel. “You get to pick the very best piece,” she writes in Your Life as Story, “whether it’s right in the middle or near either end.” In other words, memoir differs markedly from autobiography, which usually covers the entire life of its subject, from beginning to end.

“In its simplest form a story is: what you wanted, how you struggled, and what you realized out of that struggle,” Rainer adds. Taking this a step further, it would seem that many of our struggles as human beings have to do with either avoiding loss or trying to come to terms with it.

My favorite memoirs, bar none, are Manhattan, When I Was Young (1995) and Speaking with Strangers (1998) by the late Mary Cantwell. Cantwell captures the flavor of New York during the 1950s and 60s like no one else. Her themes, which touch on loss−specifically the loss of love−also manage to transcend the various categories of memoir that have grown up over the years.

One of the most popular of these categories is what I call the “mother memoir,” of which Angela’s Ashes is a prime example. When it comes to this type of memoir, two perennial favorites of mine are All Over but the Shoutin’ (1997) by Rick Bragg and The Color of Water: A Black Man’s Tribute to His White Mother (1996) by James McBride.

In All Over but the Shoutin’ Bragg describes how his mother struggles to hold the family together by working twelve-hour days picking cotton and taking in ironing. The Pulitzer Prize-winning journalist then goes on to describe in hilariously colorful language his own struggles as a fledgling reporter who eventually makes it onto the staff of The New York Times.

I was reminded of The Color of Water recently while looking over my son’s summer reading list. (After two years as a New York Times bestseller, this classic of African-American literature is now a fixture on high school and college reading lists from one end of the country to the other.) McBride−a former classmate of mine at Columbia, I’m proud to say−paints a compelling portrait of his mother−a white Jewish woman from the South who fled to Harlem, where she married a black man, founded a Baptist church and eventually put twelve children through college.

The Long Goodbye (2011) by Meghan O’Rourke is a deceptively simple story about a mother who dies of colon cancer at the relatively young age of fifty-five. Although aspiring memoirists are often cautioned not to write about commonplace illnesses, such as cancer, writers as gifted as O’Rourke can easily afford to ignore this admonition.

An Unquiet Mind (1995) deals with another type of loss: the terrifying loss of one’s sanity. The author, Dr. Kay Redfield Jamison, a brilliant professor of psychiatry, writes with astonishing insight about her lifelong battle against manic-depressive illness, a battle that very nearly cost her her life.

A child’s disability represents yet another form of loss. In A Slant of Sun (1998), one of my all-time favorite memoirs, author Beth Kephart employs almost poetic prose as she describes her efforts to help her son, who suffers from a form of high-functioning autism known as pervasive development disorder.

The greatest and most universal of losses is, of course, death. In The Year of Magical Thinking (2005) Joan Didion offers an unflinching account of the death of her husband, the writer John Gregory Dunne. If this weren’t enough, Didion courageously confronts a second,  equally devastating loss in Blue Nights (2011), which chronicles the death of her daughter less than two years later.

Finally, what have I been reading this summer?  Wild by Cheryl Strayed, of course. Like all good memoirs−and fiction, too, for that matter−it’s about a journey. And in this case, it’s a highly physical one, after Strayed, who had no previous hiking experience, impulsively decides to walk from California to Washington State in an effort to come to terms with a loss, specifically the loss of−you guessed it−her mother.

Ah, the vicarious fascination that comes from reading about how another person copes with loss and adversity. It’s as if we know instinctively that memoir has much to teach us.

About the author: I began working as a newspaper reporter while I was still in college. After receiving my masters from Columbia University’s Graduate School of Journalism, I moved to London, where I spent more than a decade working in television news. During that time, I also wrote for several British publications, including The Sunday Times of London and The New Statesman. Since returning to the United States in 1992, I have continued writing for a variety of newspapers, magazines and on-line publications. I would love for you to visit my blog at peggyrileythomson.com