With today’s blog post, I’m launching a brand new series for the blog—posts written by guest bloggers and featuring unique and profitable writing careers. For now, I am calling the series Writer @ Work—but I could use a better name. If you have an idea, send it to me via email. The winning name wins a Writer’s Bylines Calendar. Today, I welcome Milwaukee-area poet Ed Makowski, who has spent the last six months working as the Pfister Narrator. 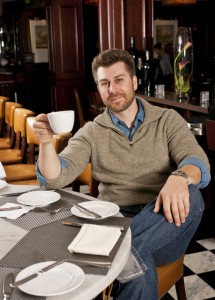 I never expected anyone would pay me to write. I’ve been writing, editing, and publishing poems now for about 10 years and taking that route one never imagines that some day it will be all about the Benjamins. It still isn’t, far from, but at least for six months I managed to wrangle a job which does pay, offers some handy benefits, and lets me eat well.

I live in Milwaukee, Wisconsin, where there is a hotel called the Pfister. 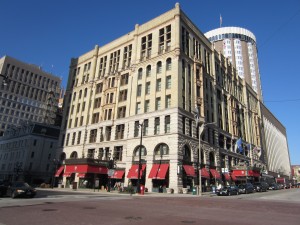 Pfister 2011: The Pfister Hotel as completed in 1893 on Wisconsin Avenue. Built using area indigenous “Cream City” brick. Behind is the tower addition from the 1960s which includes a pool, banquet facilities, two restaurants, a parking garage, and 23 floors.

This name comes from an old German leather company, Pfister and Vogel. At one point Milwaukee was the world’s largest exporter of leather goods and to capitalize on their good fortune Charles Pfister set out to build “The Grand Hotel of the West.” His place featured such unbelievable amenities as individualized heating controls in every room, a fireproof construction, and Turkish baths. When it opened in 1893 the Pfister Hotel was the pinnacle of Victorian design and technology.

The Pfister also possesses the world’s largest hotel-owned Victorian art collection. A few years ago they started considering innovative ways to connect the hotel’s history with the present. They decided to institute an Artist in Residence program. This program would be a one year commitment and offers the artist a work/gallery space prominently displayed on the ground floor of the hotel’s main thoroughfare. The Pfister offers the artist a $1,000 per month stipend and takes 15% of any sales (which is tiny compared to the typical 30-50% commission found in galleries).

The artist program was successful and they decided to broaden their scope to include writers. Their vision was that the writer would function as an in-house story gatherer for guests, employees, the artwork, the hotel’s history. Basically an open notebook to fill with the people one encounters inside the brass doorhandles. A person who could “narrate” for the hotel. The idea is wasn’t to employ someone to write advertising copy, but rather to locate writers to interpret the spirit and essence of individual guests and employees.

I’m the 3rd Narrator, and the Pfister Hotel is on the hunt for my successor. I applied the first two times but my portfolio wasn’t anything special and, honestly, I didn’t give the application the time it deserved. When I applied the third time I’d spent the last several months interning with Milwaukee’s National Public Radio Station, 89.7 WUWM. This helped me sharpen my interviewing skills, as well as obtain a basic understanding of audio recording and editing. I’d also started a storytelling series with the station called, The Lunch Counter. One of the things I highlighted in my application was that The Lunch Counter could be housed at the hotel during my “stay.”

In my application proposal I offered things I didn’t expect anyone else would be able to offer. Audio, photographs, and poems. Sure, everyone has an mp3 player, or an iPhone with a record button. But how many people have taken the time to learn how to create and edit files and place them on the internet for listening and downloading. I don’t say this to toot my own horn, rather, I took great care to explain in the application how my options of story rendering would likely be more diverse than other applicants. I also stated my blogs would feature more pictures, making them more eye catching and interesting to the reader. A more engaging blog=more interested readers=more readers=more visitors. Whatever unique advantages or skills you possess as a writer is what what should be highlighted.

My posts have been incredibly varied, as have been the people I’ve happened to meet. I met a guy who was in town for the Veteran’s Day Parade and told me about his out of body experience in Vietnam. Then there was the guy who designed the silver lining on potato chip bags, and the lids on pudding containers. One of the first things I did was interview the head archivist of Johnson Controls, as the Pfister Hotel’s heating system was the first in the world to feature individualized temperature controls in every room. There was the woman whose grandfather stayed at the hotel while arranging safe passage for their family to escape the Holocaust (But before her family found that out her daughter had already booked the hotel for her wedding. Crazy, huh?!). One bartender was a “bunny” (server) in the 70’s in the bar which overlooks Lake Michigan. But some days nothing particularly interesting happened. One of those days I made a scavenger hunt of photos which highlight the hotel’s old world craftsmanship and attention to detail. Another day I researched the heck out of my favorite painting. I spend my time roaming the halls, lobby, restaurants, waiting for an idea or conversation to present itself. 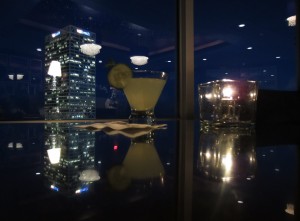 The Good Life cocktail in Blu: The view from 23rd floor cocktail lounge Blu is remarkable.

The position, functionally, is a unique blend of spy, conversationalist, and interpreter. This is a hotel after all and many people are on vacation and some do not want to be bothered. There are plenty of people who don’t care to have some young writer guy record their story. Feeling out that vibe is something I let happen naturally. If conversation with someone goes tepid I wish them a good night and take a walk. Part of making me look inviting is my choice in dress, but the hotel staff helps out a great deal. As a bartender, I know tipping is the key to a staff who wants to engage you. Having tipped well from the start, bartenders and servers gladly include me in their open conversations with guests. By including me in conversation they’re subconsciously letting guests know I’m safe to speak with.

When the hotel telephoned me and officially invited me to be the 3rd Pfister Narrator I did my best impression of a poet who is offered paying jobs all the time. Then I rushed out and bought an on-location audio recorder and low-light digital camera I’d had in the back of my mind. Nope, that first paycheck didn’t replace the worn clutch in my Subaru, it bought equipment to make more art.

Nuts and bolts? 2 blogs per week for 6 months. $1000 per month, plus a free parking pass and per diem to be used while engaging guests in conversation. Free food in the employee lounge. Discretion and common sense. The position does not include one’s own hotel room. In the end I’ve been allowed to have a space to practice my form and help a Milwaukee landmark garner greater appeal. What more could a poet hope for?

About today’s guest blogger: Ed Makowski is a poet/writer/artist/radio personality who works and lives in Milwaukee, Wisconsin. While working as Eddie Kilowatt he released two poetry books, Manifest Density and Carrying a Knife in to the Gunfight. Density was included in Best New Poetry of 2006 and Gunfight received the Carma Writer’s Award. Both were released on his indy press Full Contact Publishing. Ed is also a regular contributor of interviews to Milwaukee’s NPR station 89.7 WUWM. This is also where he curates The Lunch Counter storytelling series. Ed is also working on a few different poetry books, each taking overtly different directions; dialogue poems, history poems, longer storytelling poems. Between writing projects and working Ed likes to ride motorcycles and backpack into the middle of nowhere. Visit Ed online at: www.edmakowski.com. Read Makowski’s moving dialogue poem, written after interviewing a guest.