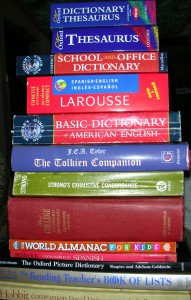 Metaphors. According to my Merriam-Webster‘s Collegiate Dictionary (11th edition), a metaphor is: “a figure of speech in which a word or phrase literally denoting one kind of object or idea is used in place of another to suggest a likeness or analogy between them.” Their example: drowning in money.

Have you ever read a book and found a metaphor that changed the way you thought about an event, an idea, a character or an emotion? In the marvelous novel, Fludd by Hilary Mantel, Father Fludd uses unique metaphors and similes as he speaks to Sister Philomena about how do deal with her past (she is a former nun who was tossed out of the convent):

“…there are times in life when you must murder the past. Take a hatchet to what you used to be. Ax down the familiar world. It’s hard, very painful, but it is better to do it than to keep the soul trapped in circumstances it can no longer abide. It may be that we had a way of life that used to satisfy us, but it does so no more; or a dream which has soured by long-keeping, or a pleasure which has become a habit. Outworn expectations, Sister, are a cage in which the soul rots away, like a mangy beast in a menagerie. When the reality in our head and the reality in the world are at a disjunction, we feel pained, fretted—” (p. 103)

Wow. Outworn expectations are a cage in which the soul rots away. Excellent stuff here.

So, now that we’ve seen a spectacular metaphor, here’s one that’s trite: Life is a journey. In a helpful article about metaphors, Richard Nordquist demonstrates just how trite this metaphor is by listing  several examples of the metaphor in advertising slogans and popular songs.

So here’s your assignment, writers. Find a trite or hackneyed metaphor either in your current work in progress, a popular novel, or online (at sites like Metaphor List). Then, set a timer for 5 minutes and do a metaphor brainstorm. Create as many metaphors as you can. No doubt, with all that brainstorming, you’ll land on at least one workable metaphor!