Today’s tip comes from my friend and colleague Lisa Walker England. She’s a fantastic businesswoman and artist—and has stopped by to talk about one of her recent projects, a graphic novel that she’s releasing on her blog: The (Re)Invention of Alethia Grey. If you’ve ever thought you might be more suited to visual storytelling, read on! (And if you just want more tips about what graphic novels to read, you’ll find that below, too.) 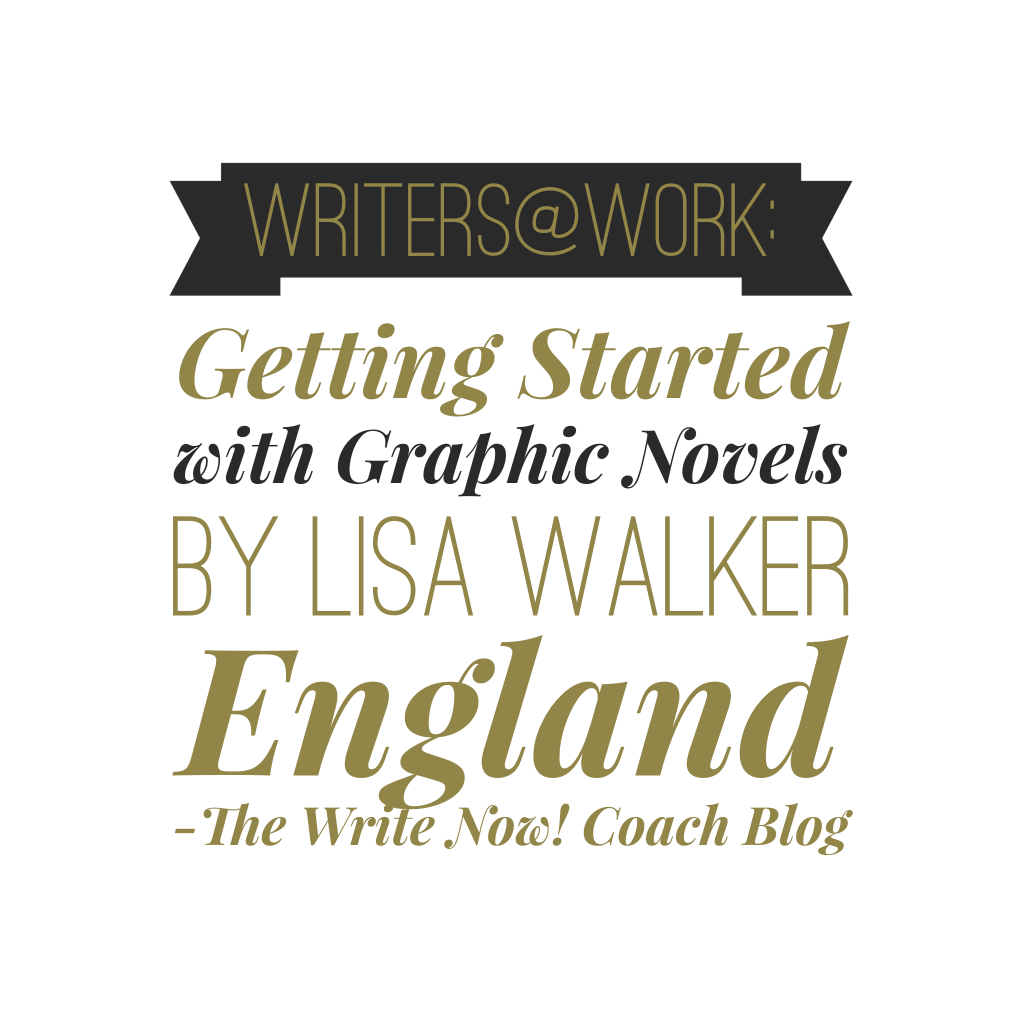 We’ve all heard the saying, “A picture is worth a thousand words.” If that’s true, then a graphic novel must be priceless. Many writers consider visual storytelling intimidating, but transitioning from prose to pictures can be easier than you might think. I made the leap. You can, too. Here’s what you need to know to get started.

Graphic novels have been called “the poor man’s movie.” To me, this is their biggest appeal. As visual media becomes ever more prevalent in our culture, the graphic novel format enables individual writers to capture new audiences without a huge production budget.

So what is a graphic novel exactly? At its simplest, it’s a novel-length story told primarily in visual format. Often the final product is a compilation of smaller comics (28 – 32 pages each) that each unfolded a piece of the running storyline.

Many, if not most, graphic novels are told in comic panel format, but increasingly, new releases borrow techniques from picture books, fine art, collage and even multimedia. Graphic novels can be in any medium, any genre and any subject matter. They can be written for any age group.

As you’re planning your graphic novel, keep one rule in mind. I call it The 80/20 Rule: tell your story 80% visually and 20% (or less) verbally. Never tell your audience what you can show them through pictures or symbols. While prose often focuses on a character’s thoughts and emotional arc, a graphic novel expresses these internal elements through action and facial expression, or sometimes through voiceover. The camera angle of each image and arrangement of images on the page also speak volumes.

Every graphic writer’s process is different; I can only speak for mine. Currently I’m releasing a steampunk mystery graphic novel called The (Re)Invention of Alethia Grey on my blog. I have no formal art background other than some lessons as a child, but I write and draw the story myself.

Most graphic novels start out with a written script that looks similar to a screenplay. The writer’s artist partner then uses the script to plan all the necessary images or panels to tell the story. S/he also must decide how many panels fit onto each page. My case is a bit different, however. Because I’m both writer and artist, I skip the script step. The original story was captured in a notebook; I revise it during the drawing process.

In most cases I have a strong idea about how each page should look. Most of my pages have no more than 6 panels, sometimes as few as 2 or 3. Each two-page spread is a scene or a complete scene segment with conflict and a twist of its own. In a longer graphic novel, a scene might last for multiple page spreads.

Personally I enjoy adding filigree designs, animals or other decorative elements onto the pages to communicate subtle meanings related to the story. All this sifts into the reader’s subconscious much more organically than the written word, which must be processed in the logical portion of the mind.

As I draw, each page comes together bit by bit with light sketches. Then I add the dark tones, midtones and light tones, “sculpting” each image as I draw and adding details where needed. Sometimes I have to start over—but very rarely. I work with the page as it unfolds.

One page per week might not sound like much, but every little bit adds up fast. I draw all the images by hand in charcoal and pencil on 11”x17” Bristol board. Then I import the image into Photoshop for cleanup and formatting. I add talk bubbles and narrative text (in rectangular boxes) right before releasing the page to my readers.

If you’re interested in trying a graphic novel, go for it! You don’t have to be a fantastic artist to communicate well. At the very least, you’ll learn to lean on visual cues rather than having your characters or narrator tell everything. If you don’t feel up to the drawing, barter services with an artist and tackle the project together!

If you’re looking for great graphic novels to inspire your work, try these:

The Leaning Girl by Benoît Peeters

Also check out the many free web comics that run each week. I enjoy:

I hope you’ll stop by my site, too, and read The (Re)Invention of Alethia Grey.  I’d love to hear from you about your story and how your first graphic novel project goes!

About the author: Lisa Walker England is equal parts brand strategist and serial storyteller. She lives in Milwaukee, Wisconsin, with her husband Nathan and two cats. The (Re)Invention of Alethia Grey is her first graphic novel. Visit her online at her business site or her blog.