One of my clients sent me a note, worried that she wasn’t writing and didn’t feel like it. Sometimes taking a break from writing can be a good thing—it allows you the space to think about new projects. My recommendation? Instead of forcing yourself to work on a project, use the time to journal. At the end of 2019, I offered a class on journaling. I’m offering the class for purchase at my website at the special rate of just $25 throughout January.

Today’s tip features an interview with author Nick Petrie, who just released his fifth novel in the Peter Ash mystery series, The Wild One who was at Boswell Book Company in Milwaukee last night (January 13) and will be at Books and Company in Oconomowoc on January 23 at 7:00 PM. 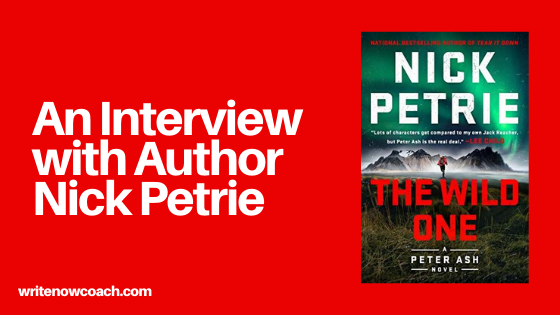 Writers@Work: An Interview with Nick Petrie 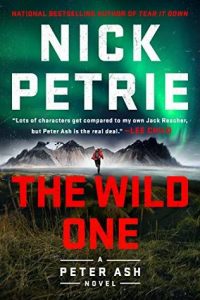 Congrats on your new book, The Wild One. Can you talk a little bit about it? And for readers who don’t know your series, do they need to start at the beginning or can they jump right into this book?

My series protagonist is a Marine Corps veteran named Peter Ash, who’s having trouble adjusting to life after his war. In The Wild One, the fifth in the series, a wealthy woman’s daughter is murdered, and the daughter’s husband, Erik, takes their young son and flees to his native Iceland.

Peter, who has experienced a PTSD relapse, is asked to travel overseas and find the boy and bring him home. When a U.S. State Department attorney tries to get Peter kicked out of Iceland, he realizes that his simple mission is far more complex than expected. Then Erik’s formidable Icelandic family makes contact, and Peter’s trouble, like the falling snow, only gets deeper.

As to whether you need to start at the beginning, that’s entirely up to the reader. If you’re a fanatic about reading series in order—and I admit that I am—go for it. But the series is designed so that you can drop in with any book and still have a great time.

Often writers of series are busy promoting one book while they are writing the next one. Where are you in that process and how do you keep it all straight?

Oh, it’s much worse than that. Typically I’m promoting a newly published book while working with my editor on the last drafts of a second book, and also trying to imagine the start to a new novel, all at the same time. It’s definitely a challenge, but to be honest, it’s just the nature of this particular beast, so I just put one foot in front of the other and keep moving. I’ve definitely gotten better at the publishing juggle with each book.

Honestly, the hardest part is finding the mental space to imagine something new, but I’ve found that a long walk in the woods really helps clear the mind. That and turning off my phone and the internet!

You wrote a great article for Writer’s Digest on your writing process. Can you talk a little bit about how you approach writing a novel?

I write organically, by the seat of my pants, which is definitely not the most efficient way to complete a project. But by walking that wandering path, I find both unexpected character moments and surprising twists to the plot that would never occur to me if I wrote from an outline. I’m not saying my way is better, but it’s definitely the only way that works for me. Somebody once told me that writing a novel is like inventing a new scientific formula that you use only once. Each new novel is a new invention. That sounds about right.

I recently realized that part of the trouble I have when beginning a new book – through at least the first third of the manuscript—is that somehow, against all evidence to the contrary, I still think the new book will manifest itself in the same way as the previous one. I’m still learning to show up for work with an open mind, to pay attention, and not to try so damn hard. Holding on too tightly can crush the small beginnings of any project.

Before you sold your first Peter Ash novel, you wrote several novels that didn’t sell. What kept you going throughout those years? What advice would you give to writers who are struggling to sell their work?

I think this is the essential question for anyone who wants to write—or do any other kind of creative work, from painting to filmmaking to starting a business. Because the truth is that creative work is challenging, and it can take a long, long time to get good enough for your work to see the light of day. I wrote for 25 years, with three novels dead in a drawer, before The Drifter was accepted for publication. But each novel taught me something new, and I used those failures as the fuel to power me through the next one.

People often ask me about the publishing industry, as if there’s some trick to getting published. But the industry is the wrong thing to focus on. You should focus on the writing. On getting better. Because the industry is desperate for good work, and when you write something truly excellent, they will fall all over themselves to publish your work.

So keep at it. Turn off your phone, turn off the internet. Find a quiet place and get to work. 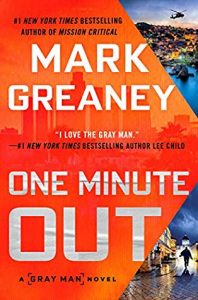 As I write this, I’m getting ready to go on tour. Several talented authors are hosting me at libraries and bookstores, including Andrew Grant, Gregg Hurwitz, J. Todd Scott, and William Kent Krueger. In the last few weeks I’ve been getting caught up on their latest novels, which is a real pleasure.

When I get home, I’ll be paying it forward by hosting Mark Greaney at Boswell Books in Milwaukee, so I have his new novel, One Minute Out, to look forward to. 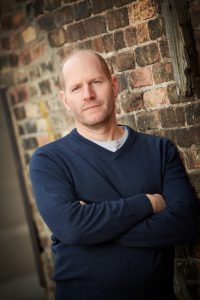 Nick Petrie received his MFA in fiction from the University of Washington. His first novel, The Drifter, won the ITW Thriller and Barry Awards, and was nominated for Edgar, Anthony, and Hammett Awards. He won the 2016 Literary Award from the Wisconsin Library Association and was named one of Apple’s 10 Writers to Read in 2017. Light It Up was named the Best Thriller of 2018 by Apple Books and has been nominated for a Barry Award. His books in the Peter Ash series are The Drifter, Burning Bright, Light It Up, Tear It Down, and The Wild One. A husband and father, he has worked as a carpenter, remodeling contractor, and building inspector. He lives in Milwaukee, where he is hard at work on the next Peter Ash novel.