Do you have a great big stack of books to read over the holiday? I know it’s just a single day—but I’d hate to be stuck without a book to read. 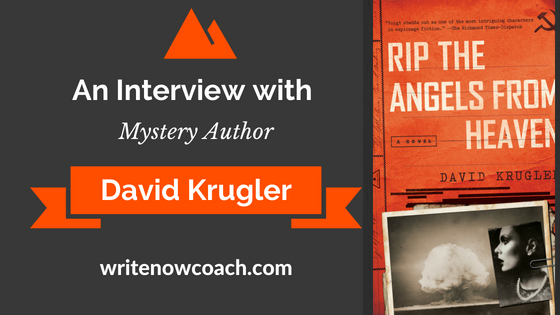 An Interview with Author David Krugler

Your sequel to The Dead Don’t Bleed has just come out. Congratulations! Can you tell us about your new book, Rip the Angels from Heaven? 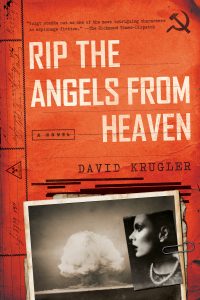 It’s set in Washington, D.C., and Los Alamos, New Mexico, in July 1945. Lieutenant Ellis Voigt of the Office of Naval Intelligence, the narrator from The Dead Don’t Bleed, is fighting to prevent the Soviets from infiltrating the Manhattan Project, which is just about to test an atomic bomb in a remote location in New Mexico. The United States and its allies are winning World War II, but as the final victory approaches, Voigt’s troubles are mounting. He can’t escape a web very much of his own making. The FBI suspects that instead of only posing as a communist spy when he’s undercover, Voigt actually is a double agent. Meanwhile the Soviets believe he’s holding back information from their contacts—and they’re willing to use any means necessary to extract it.

The FBI and the Soviets both shadow Voigt when he’s sent to New Mexico on a secret mission to identify a Soviet spy. As the scientists at Los Alamos prepare to test the first atomic bomb, Voigt faces the dilemma he’s desperately been trying to avoid: He can stop the Soviets from getting the bomb or he can save himself, but he might not be able to do both.

I know that in this story you blend real life historical characters into the novel, along with the fictional characters. Can you talk about that process—how you went about it and if there are any rules for doing it?

The way I went about it was, first, to limit myself to real life historical characters who were actually part of the events I was fictionalizing. The atomic bomb test in New Mexico on July 16, 1945, is a major scene in the novel, so several of the scientists who helped build the bomb witnessed the test and they appear in the novel. Second, I did a lot of research so I had a strong sense of who these people were in real life and I tried to depict them accurately, down to finding out which brand of cigarettes they smoked and learning about any distinctive mannerisms that would make them vivid and memorable as fictional representations of themselves. Among other real-life figures, the novel features Robert Oppenheimer (Director of the Los Alamos Laboratory), physicist Klaus Fuchs, and mathematician Richard Feynman. One of these three was a Soviet spy in real life (I won’t say which one here!), but in the novel I decided not to work with that historical fact, instead centering the espionage around a character of my own creation. That choice brings me to a third rule or guideline: Don’t be afraid to ignore some of the history in order to make your fiction work.

You have a unique setting for part of this book—the nuclear test site in New Mexico. What kind of research did you do to portray the setting of the novel?

As implied in my preceding answer, I read a lot of biographies. I also read historical studies of the Manhattan Project and the creation of Los Alamos as the key laboratory. Google Images was really helpful, too. Just to give one example, I found a web site that has scans of the photo IDs of important figures of the Manhattan Project: http://blog.nuclearsecrecy.com/2012/08/31/the-faces-of-project-y/. Finally, I used WWII-era military records from the National Archives. I fictionalized some of these sources and included them in the novel as “document insertions” to give the novel a more realistic feel (a tried and true practice in espionage fiction).

You work as a professor, write academic books, and write mystery novels. What are some of your secrets for juggling it all?

Being disciplined. I write early in the morning before I head to campus to teach or to work on my scholarship. I typically only have an hour or so to write fiction each morning, but as many writers will tell you, each hour and the 400-500 words you produce during that hour all adds up. Since that’s not much of a secret, here’s one trick that may not be as well known: Teaching history is good preparation for writing fiction, especially when I use novels (not my own!) to teach history. Some of the novels I’ve used over the years include John Dos Passos, The Big Money; Kurt Vonnegut, Slaughterhouse-5; and Toni Morrison, Beloved. Last semester, I used Tim O’Brien’s The Things They Carried in a course on the Vietnam War. One of the advantages of using fiction to teach history is, to use a phrase of O’Brien’s, that it gives us “Story Truth:” what can be imagined and dramatized about a historical event (especially the experience of war from a combatant’s point of view) is often richer, closer, and more memorable than a traditional “this is what it was like” history lesson. I find that really inspiring.

The most recent books I read are James Benn, The Devouring, William Kent Krueger, Sulfur Springs, and Kathleen Kent, The Dime. The book I’m starting next is a classic from Lawrence Block: The Burglar Who Studied Spinoza. It will be a great read, I’m sure, but I’m not counting on moving on to Spinoza after finishing it! 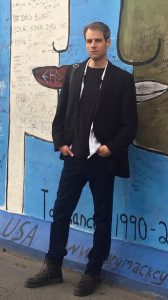 About the author. David Krugler, historian and novelist, grew up in Wauwatosa, Wisconsin. After graduating from Creighton University, where he studied creative writing, he earned a M.A. and Ph.D. in history from the University of Illinois at Urbana-Champaign. He now teaches American history at the University of Wisconsin—Platteville. He has published works of nonfiction on several different topics: Cold War propaganda, nuclear warfare, and racial conflict in the United States. His first novel, The Dead Don’t Bleed (Pegasus Crime, 2016), a World War II spy thriller set in Washington, D.C., came out in 2016. The sequel, Rip the Angels from Heaven, will be released on July 3, 2018.