I met Evan Guilford-Blake this summer at the Mississippi Writer’s Guild conference . He’s an award-winning playwright, the author of a brand-new noir novel, Noir(ish), and a fascinating guy. He’s stopped by the blog today to write about what books and movies inspired him to write his new novel and—exciting news—to give you the opportunity to win an ecopy of his new book (see the details below). Enjoy! 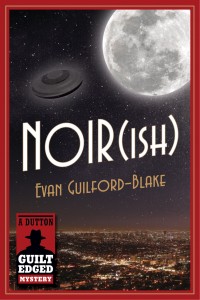 I’ve been a playwright for more than twenty years. That occupied the bulk of my time until a few years ago when I began, again, to write fiction. When I set out to write my novel Noir(ish), I was already deeply steeped in fiction- and film-noir’s language and conventions. Many of the books and movies were conscious influences, and I’d already written Noir(ish) as a stageplay; that, of course, was the single greatest “influence,” derived as it was from the same sources. I named the fictional characters (there are some real-life ones, too) for players and the roles they played. My detective, for example, is named Robert Grahame—for Robert Mitchum and Gloria Grahame, two of the genre’s film stars. There’s a cat named Greenstreet and an office building at the corner of Floyd and Thursby Streets.

For the novel, however, I was able to delve deeper into the print and screen literature. Among those that served as “essentials” were:

The Maltese Falcon. Dashiell Hammett’s novel and John Huston’s film are among the archetypes of noir: They feature the hard-boiled detective, the femme fatale and the red herring—the object everyone wants which has, ultimately, no value.

The Big Sleep. Raymond Chandler’s Philip Marlowe is the quintessential noir figure and, this, Chandler’s most complex book, has twists and turns that make it a classic. There are events in it even Chandler couldn’t explain. When the book was filmed, the director, Howard Hawks, and the screenwriter, William Faulkner, called Chandler to ask him to explain who was responsible for the enigmatic death of the one of the minor characters. Chandler’s response was: “I don’t remember.” One of the unique things about The Big Sleep is that its two principal women alternate as femmes fatale. It’s a device I found handy when writing Noir(ish).

Double Indemnity. James M. Cain’s novella and Billy Wilder’s film (with a Raymond Chandler screenplay) is probably the definitive “non-detective” noir, and one of the best examples of another key noir element: the vulnerable and unsuspecting male who falls prey to the fatale’s plotting. The endings of the book and the film are very different. I prefer the film’s but there are many things in both versions that enabled Noir(ish)’s plot and characters: Rereading it led me to lots of ideas I was able to incorporate.

I chose, however, to make Noir(ish) a cross-genre novel, for two reasons: First, I wanted to distinguish it from today’s frequent neo-noirs. And second, I thought of the book as both a mystery and a comedy. Thus, the other major influence was Jasper Fforde’s Thursday Next novels (The Eyre Affair, Lost in a Good Book, et al.) which aren’t noir but which contain many of its elements and are both fantastic—which relates to the “ish” of the title—and comic.

Of course, writing the book—any book—comes down to what I think of as writing’s three basic rules:

Write what and who you know. I feel like I could write a book called Everything You Always Wanted to Know about Noir but Were Afraid to Ask. I “knew” noir from decades of reading and watching it on film, but I looked through my books and watched the films again so I could create references to the genre. I sought out every opportunity to include a name, place or character that readers even slightly familiar with the genre would recognize, thus adding to the fun.

Facts must be accurate, appropriate to the time period, and plausible. I learned what I didn’t already know via research: The book is set in a fictional Los Angeles in 1947—the height of the noir era—and I researched everything very carefully. The plot turns on the (still-unresolved) murder of the gangster Bugsy Siegel, about whose life and death I know more now than I ever dreamed I would.

The story must follow some identifiable logic. Sure, there’s a strong element of fantasy in Noir(ish), but the rule is even truer in fantasy than in naturalistic fiction: You can create a world but once you do, you—and the characters—are required to follow its rules.

So when I go back to write the sequel, which I hope to do in the next year or two, I’ll have all the groundwork laid. The central character of that one, by the way, is going to be a woman: Lauren Stanwyck (named for Lauren Bacall and Barbara Stanwyck), the cop and, alternately, Robert Grahame’s bête noire and one-time romantic interest in Noir(ish).

I anticipate it will be just as much fun to write, and even more fun to go through my book and video library and revisit all those wonderful and mysterious people I’ve come to know over the years.

Your turn: Do you have a favorite Noir book?

About the author. Evan Guilford-Blake writes plays, short and long fiction and the occasional piece of creative non-fiction. You can find him on his website, Amazon, Facebook and Twitter. He and his wife (and inspiration) live in the Atlanta area with two birds, one dog and a truckload of noir books and movies. Evan has eighteen published plays. Noir(ish) is his first novel, but he’s won 38 playwriting competitions, 11 short story contests and has twice been nominated for Pushcart Prizes.
a Rafflecopter giveaway