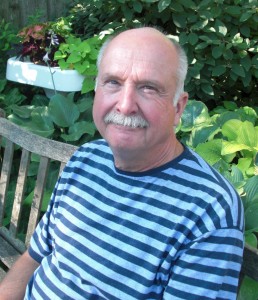 I met Paul Geenan several years ago and was immediately intrigued by his intellect and curiosity. When I heard about his new book, Civil Rights Activism in Milwaukee, I wanted to learn more about the book and Geenan’s writing process. Geenan was kind enough to offer an interview, and you can read it below.

What’s this new book about? This book describes the struggle for civil rights in the 60’s and the 70’s on the South Side of Milwaukee.  Blue-collar workers living in small bungalows, duplexes and rear-lot cottages supported the numerous churches and visited the “ma and pa” taverns on almost every corner. Freeway construction played a role in the resistance of the South Siders to African Americans moving into their neighborhood. Young, newly married couples lost access to inexpensive homes taken by freeway construction, resulting in being forced to live with their parents.

Nuns at Alverno College offered programs on race relations to its students, faculty, and the community, resulting in two Alverno students, Maria Varela and Margaret (Peggy) Rozga traveling to the South, putting their very lives at risk, to help African Americans gain their voting rights.

Jesús Salas, David Giffy and Bill Smith, with the support of Cesár Chávez, organized Wisconsin migrant workers into an independent union called Oberos Unidos, fighting for improved working and living conditions. Failed cucumber and potato strikes resulted in many of these workers moving to the South Side of Milwaukee.

Since Wisconsin was the highest consumer of brandy, the state was an important target for the United Farm Workers strike against grape producers in California. African Americans, students, church and community members demonstrated at grocery stores, encouraging shoppers to not buy grapes resulting in grape shipments to Wisconsin dropping by 61% in 1969.

Hispanics fought for the education of their children in Milwaukee Public Schools and at the city’s universities.  After several months of daily protests, 24 hour vigils and hunger strikes, Hispanics took over the UWM’s Chancellor’s office, locking a university staff member in a rest room This resulted in Hispanics being given access to the University for the first time.

Jesús Salas, Vel Phillips and Father Groppi led “Welfare Mothers’ March on Madison” resulting in taking over the Assembly Chambers and one thousand National Guardsmen being called out.

The decision by Federal Judge John Reynolds to desegregate MPS schools set off a struggle to keep bilingual schools in Milwaukee. Sophisticated Hispanic parents were successful in strengthening the bilingual schools, working with the African American community, the special master appointed to oversee the desegregation effort, the school board, school administrators, the teachers’ union, the media and community groups.

How did you come to write this? A longtime civil rights activist worried that the people who lived on the South Side of Milwaukee in the 1960s and ‘70s were seen as isolated and prejudiced. This person was worried that people would only remember the 13,000 angry South Siders who screamed epithets and threw garbage at Father James Groppi and his 250 young men from the NAACP Youth Council at the south end of the Sixteenth Street Bridge in August of 1967.

Can you talk about your research process? I relied heavily on personal interviews for this book in addition to the existing published works on the subject. Often a person being interviewed makes suggestions on other people to interview and knows of additional sources.  After a month or so of research I usually have enough to create an outline, which gives me a sense of how to budget my time. I continue interviewing and doing research right up to the point where I submit my book for publication.

Can you offer advice to writers who want to write a nonfiction history book If it is possible, using personal interviews gives an added perspective to the story you are telling.  Using as many names of people as possible adds to the credibility and interest of a book.  Using photos from private sources are best, as other sources, such as local and state historical societies, are expensive. 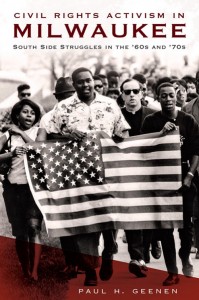 Can you talk about your road to publication: I submitted an Authors Proposal to History Press in January of 2013 and got an email in June saying that they liked my book concept. So it took a while to get an answer. The effort I had put forth in marketing my first two books with History Press, Schusters and Gimbels: Milwaukee’s Beloved Department Stores, and Sherman Park: A Legacy of Diversity in Milwaukee, helped in getting this proposal accepted.

What’s your next project: I would like to write about some of the major players in the civil rights movement in Milwaukee in the ‘60s and ‘70s.

Your turn:  Writers, what questions do you have for author Paul Geenan?