I am so excited to welcome my friend and colleague, the romance author Elizabeth Cole, is here to talk about using the rapid release strategy to increase your sales. This is particularly helpful for indie authors—so check it out and pass it on to your friends.

Basically, rapid release is a strategy where you release several titles rapidly (clever name, huh?) to take advantage of people’s short attention spans, but more importantly to exploit the algorithms built into the vendor websites we all use—most significantly Amazon.

For example, you might release a trilogy over three months, spacing out your release dates to be 30 days apart, which according to more sources is the magical cut-off time where Amazon stops aiding your books because it’s a new release. And yes, there’s a whole school of thought out there that Amazon aiding anyone is a false notion, but that’s another post for another day. The 30-day model is not mandatory. You could also do every 2 weeks, or 6 weeks, or some other interval that works for you. And one more point: this is a strategy that usually only works for indie authors, because it requires a great deal of control over your production schedule.

As I hinted above, the reasons for doing a rapid release are to take advantage of the cumulative effect of having multiple books be “new” enough to surface thanks to algorithms that favor newness, but also to keep readers paying attention and ready to pounce on your next book. It’s a lot more exciting for a reader to hear that they can get the sequel in a month versus waiting a year or more!

You can also capitalize on that enthusiasm by having your ebook set up with a pre-order link to the next book just as the reader finishes the story. Plus, having several books come out within a relatively short period gives you a lot to talk about online, which helps you stay in other people’s sights. You can hype the next release date while also sharing nice reviews of the book that just came out, and it feels more natural than just breaking the surface of the internet ocean every two years to declare that you wrote another novel while underwater.

It’s a common tenet of advertising that people need to see something about 7 to 10 times before it sticks in the brain. (That’s why Coke advertises so relentlessly. Yes, everyone on the planet knows about soda. But they need you to constantly be thinking about their brand of soda so you reach for it when you get to a store). Similarly, a rapid release strategy for books allows an author to talk about recent and upcoming books in a way that feels newsworthy, not just sales-y, and gets their name and brand in front of readers to increase awareness.

How to do it

Here’s the meat of it. For this strategy to work, you obviously need to write a lot so you can have books ready to go. Here’s what I did. Years ago, I wrote several romance novellas, but they never sold to my satisfaction, mostly because they didn’t reflect my author brand very well and they weren’t a cohesive series.

So I unpublished them, and used the skeleton of the plots to create new, novel-length stories that were all one connected series called the Wallflowers of Wildwood. This meant tripling the word count for each (except the holiday story, which I kept novella length even though I made lots of little changes to make it fit into the new series setting).

Overall, that took over a year of work. And because I experienced some unplanned Life Events, I didn’t have the last two books completed when I started releasing the first books, so I had to HUSTLE to finish them in time.  My first piece of advice: don’t do that. Get your books done before you begin the release schedule!

In addition to writing, you’ll also need to make sure you’ve got covers ready and an editor and proofreader lined up with all the appropriate dates so that the production goes smoothly. For example, I worked with my cover designer to get all five new covers done at once to ensure that they had cohesive branding (aka “matchy-matchy”), and so I had them ready to go for promotion on social media and elsewhere.

Here’s the breakdown of my titles and release dates:

You’ll notice a slightly larger gap between the third and fourth release, which I chose to do because releasing any book right around Christmas is so challenging that it outweighs the lure of the algorithm. But in general, I aimed for approximately one month apart, which would allow me to pretty much always have at least one title in the “new release” category so help discoverability. The preorder rate is a good proxy for how engaged your readership is. I attribute the higher number for the first book to be a reflection that my most loyal readers were just really excited to get any book after my year of absence, and the “dip” for the third because it was just a novella, not a full-length novel. 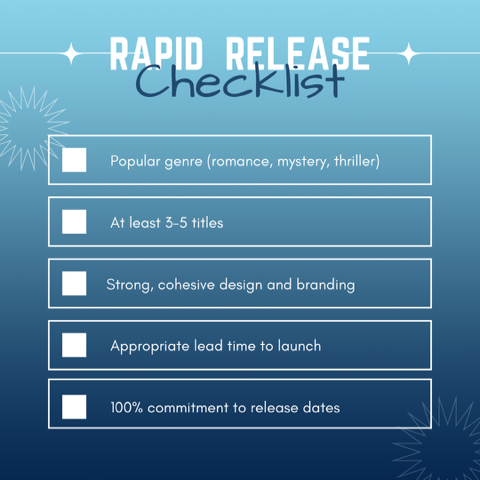 With the final novel published just before this post goes live, I now have a complete series available within a 6-month span. Going forward, I will be tweaking my promotion to talk about the paperback versions, an upcoming digital “box set”, and running occasional sales on the first book to encourage new readers to try the series. I can do all this with confidence because I’m not just selling one book, I’m selling multiple books at once, which will increase my ROI for every sale. Rapid release can really give you more versatile ways to discuss and promote your books.

Would I do it again?

Honestly…probably not soon. Don’t get me wrong: it’s a great strategy and I had very promising results. But it’s a lot of effort, and for most writers planning a rapid release will likely mean a long period of no releases. That’s not ideal. So as a writer you’ll have to assess what you’re capable of in terms of production, and also if rapid release is a good method for your books and your genre. I think it makes sense if you write commercial fiction, tend to do shorter works (George RR Martin need not apply), you can write quickly, and you can truly commit to the release dates you set. Some authors might be able to multitask, say by prepping a rapid release series while they’re also working on a big doorstopper novel. But it’s up to you to be honest with yourself about your capacity.

It’s definitely nice to have several titles come out in a rush, since it really increases your potential sales. Rapid release may be an especially good option for an author pivoting to a new genre or pen name, because it allows for some tinkering behind the scenes to get all the books just right before they get released. But there’s also a lot to be said for the slow and steady approach. Whatever you choose, the most basic rules still apply: Write the best book you can, and keep your promises to your readers. 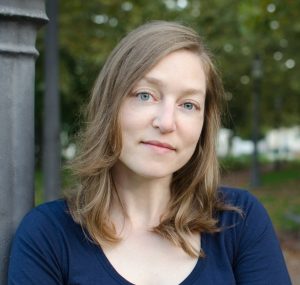 About the author. Elizabeth Cole writes both historical and paranormal romance. In some of her former lives, she was a bookseller, archivist, cubicle drone, and popcorn popper. She adores tea, basketball, and cats, not necessarily in that order. She was born and raised in Wisconsin, where people are nice even to their enemies. She now lives in Philadelphia, where everybody just grunts. A grunt could mean I love you. It usually doesn’t. You can find out more about her rapidly released series The Wallflowers of Wildwood here: https://elizabethcole.co/wallflowers-of-wildwood