I’m delighted to welcome my friend and colleague Peg Rousar-Thompson to the blog. Last summer at WriteCamp Milwaukee, she spoke about the art of procrastination—and I thought it would make a great blog post. Enjoy!

The Art of Procrastination by Peg Rousar-Thompson 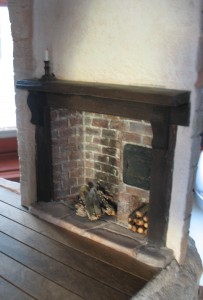 I procrastinate.  It’s probably what I do best.  And I’ve done it all my life, so I have spent considerable amounts of time analyzing this strange feature of my personality.  It all began a million years ago with my dad yelling at me for homework:  Why do you leave everything until the last minute?

I don’t know if it’s some weird thrill I get – because here, at the eleventh hour of NaNoWriMo, it’s not so exciting.  I don’t think I’ll ever look back and say, Hey!  remember when you left that novel go until the last week?

No, I don’t think it’s the thrill.

Of course, I’ve discovered that I’ll sit and ponder my procrastination as a form of procrastination.  Did I inherit this?  My parents always complete their projects in a timely fashion.  (Not so, for my children however.)  Is it part of my attention-deficit or simply some strange patterning that has always worked for me?  Is it part of my Oppositional Defiance Disorder?  I’m given a deadline, so I immediately look for ways to break the rules?

Pondering my shortcomings is a classic form of procrastination.

I also know this about my personality –  I do something that looks like procrastination.  My first, wonderful writing teacher would lecture me about it.  She said, writers write, and what she saw from me was very non-writerly.  When I get stuck in a place full of words, I’ll shift to a place without.  I have a small studio in my home and a hobby I’ve had since childhood–constructing tiny things.  I’ll physically move away from the computer for a day or two and entrench myself in something different mentally.

And yes, it appears like I am avoiding the writing. 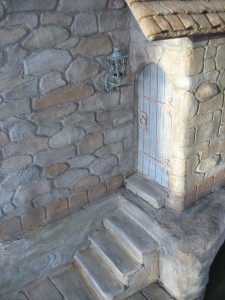 What I realized a few years back, is that I am not avoiding.  These pieces I build are a reflection of the pieces I write.  While I am constructing a wall to resemble 17th century plaster, I am envisioning my character mixing the ingredients in a bucket and skimming on the final layers.  When I am building the giant slabs of limestone that make up her front porch, I am considering how cold those rocks are when she is sitting there in December.

The building is intricately linked to the writing.

This year’s NaNo-Novel apparently takes place in a cantilevered English Tudor house, somewhere near the North Sea.  I didn’t know this until I started building it.  And apparently the main character is a baker, but I didn’t know that until I worked on the brick and mortar floor in his kitchen, considering how his legs would ache at the end of the day from the hours spent standing.

So my point in all of this?  True writers–those of us meant from birth to use words to express ourselves–are writing even when it appears we are not. It’s not something we can escape or control.  Even when it appears we have abandoned our essays and novels and poems for knitting or bookbinding or building tiny copper roofing out of cardstock–those words are still writing themselves in our heads.

As long as we provide ourselves with opportunity to sit and do the writing, okay, so force is sometimes necessary, due to that legitimate form of procrastination, we shouldn’t feel guilty for developing these other ways of creating.

It’ll all lead to the words.  Eventually.

Your turn. What sort of art do you create while you procrastinate?

About the author. Peg Rousar-Thompson is the ML for Kenosha/Racine NaNoWriMo and five-time-winner.  She has recently been published in Pandora’s Box, an Anthology of Mythology, created thirteen original poems for The Artist Next Door’s Nosferatu, and is author of The Naughty List, a play written for The Rhode Center for the Arts, opening December 10th.  She is also editor for Southport Press.