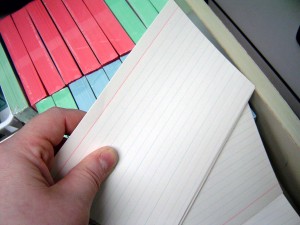 Genius is finding the invisible link between things. —Vladimir Nabokov

Vladimir Nabokov, author of Lolita, wrote all of his novels on 3 x 5 index cards. Each day as he began his writing period, he would shuffle the cards until he found a scene that had energy for him and started writing from there. When the scenes were done, he rearranged the cards until he discovered the novel’s order.

How many writing projects are abandoned half way through because we are slaves to writing in order? Skip the boring or difficult parts and write the scene you have the most energy for right now.