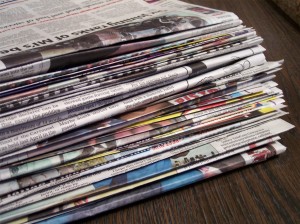 POSTCARD UPDATE! Welcome to day 7 of NaNo! The postcard giveaway has proved to be so popular, I’ve decided to extend it! I’ll be sending encouraging and FUN postcards to the first 100 people who email me their Write-A-Thon receipt and their address. But you better do it soon—we gotta give those snails time to reach you with the snail mail!

Last year, I attempted to write a series of three children’s chapter books during National Novel Writing Month. It all went just fine until I got to the third book. I had the characters but I had run out of plot ideas. Then I got lucky—a news story provided the perfect idea for my third book’s plot. With barely a pause in my schedule, I was off and running.

We’re seven days into NaNoWriMo, and this year I am seeing plot ideas in every newspaper I read. Where were these ideas when I was desperately searching for a plot a few weeks ago? Nevermind, the stories have shown up. I don’t know what is going on with you and your crazy NaNo Novel project. But if you don’t have a plot or you need a new plot twist, sometimes truth is stranger than fiction. Here are some plot ideas that you can steal from real life.

1. The Happiest Woman in America. Last week, I was amused by this story. Evidently, USA TODAY asked Healthways to look at their data (the data comes from a cooperative survey between Healthways, a wellness initiative, and Gallup) and discover the factors that contribute to well being for women ages 45-55. Then, USA TODAY chose one woman who embodies these factors in her life—Mary Claire Orencic. Orencic appeared on television and in a series of articles in USA TODAY. The novelist in me started wondering about what would happen if the happiest woman in America showed up in my book. What if she moved next door to one of the characters? What if she became a character’s boss? Or what if one of my characters got chosen as the grumpiest woman in America? Take this story and use it in any way you want, novelists!

2. Terror Plot Hatched at Waffle House. Last week, four senior citizens were arrested because they had plotted to attack government officials via a chemical attack. One of the men, Frederick Thomas, 73, had an unusual bucket list; it was filled with the names of people he wanted “taken out.” If this sounds like a novel, maybe it’s because it was inspired by one. Thomas was obsessed with an online novel by Mike Vanderboegh titled Absolved, about ordinary citizens attacking federal employees. While this terrorist plot is serious stuff, it also provides great inspiration to us would-be novelists. Find the least likely villain in your story and give them a big ol’ dangerous scheme like this one.

3. The 7.4-million-dollar Crop. Last week in Racine county, not far from where I live, authorities found a marijuana growing operation and 7.4 million dollars worth of pot. The story had some interesting features. The pot farm backed onto a school yard, yet it was well-hidden and disguised. In addition, the farm used sophisticated methods to make sure each plant was properly watered and fertilized. The mastermind behind all this is a quiet, unassuming guy who neighbors seemed to like. And get this: the authorities are planning to burn the pot. Again, this story has all of the features of a great novel plot—how could one or more of these factors rescue your story from being boring?

If none of these stories work for your project, then take a break, read or watch the news, and find one that does. The world is filled with amazing stories, just waiting to be crafted into novels!