Welcome! Today’s blog features Joyously Prolific blogger Lazette Gifford. And Gifford is prolific! She has done National Novel Writing Month for the past eleven years. She’s here to give you her best advice for making NaNoWriMo fun! 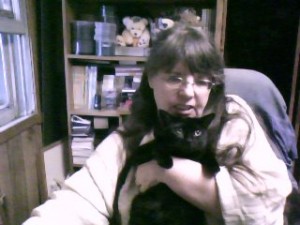 It’s that time of year again! You can hear the nervous thumping of plot bunnies as they start lining up and jostling for places. Stores are preparing to see their snack aisles decimated as authors wander through mumbling their arcane spells of  “just 273 more words” and “ninjas—ninja pirates will take care of everything.” Families and friends are bidding farewell to a companion who will disappear during November.

This is my eleventh year at the NaNoWriMo start line and I have won every year, sometimes rather too convincingly (2006: three large novels for over 260,000 words).  My second year of NaNo, I wrote a novel already contracted to Double Dragon Publishing as part of the Dark Staff series.  I thought it would be a good way to write the first draft, and I was right! Freedom and Fame (the sixth out of eight books in the set) came in at just over 100k.  I later sold three more novels to small presses, but in the changing publishing times they were held up for so long that I eventually pulled all three back and have since gone on as an Indie Author.

Kat Among the Pigeons, which I wrote in 2005 and had never sold, is now one of my better selling indie books. Silky 4, which I later rewrote and merged into Silky 3, is also available with the other two books in the set. Being an Indie Author is hard work, though. Between writing, editing, formatting, book covers, book trailers and other marketing, plainly this is not an easier way to go—only a wiser one in some circumstances. I am prolific. I have the books to make available as long as I take the time to do them properly.

This is a time of change in the publishing industry, and while I was slow to adapt to it, I am now truly enjoying the world of an independent author. To me, NaNo is part of that world.  This is a step away from traditional writing, just as Indie authors are stepping away from traditional publishing.  There will be people who froth at the mouth about what others are doing even though it will never affect their lives in anyway. They’ll shake their fists at NaNo and huddle over the story they will never finish.  Leave them to it.

My advice to anyone going to do NaNo is to have fun.  There are no horrible aftereffects if you decide you can’t reach the 50k total.  It will not mark you as a failed writer for the rest of your life. It only means that writing fast is not for you—or doesn’t suit you this year.  There is no crime in it.

Remember that you are writing a first draft and be prepared to put it aside for a while once it’s done (50,000 words may not be enough for the full novel so you may be writing for a few more months), and move on to something else before you go back and edit.  Get the story out of your head.

Every art form takes practice.  Someone painting a landscape can read all the books and blogs on the art form, but they are only going to get better at it if they actually practice putting paintbrush to canvas. Authors must write to get better at their own art form.  Early pieces are rarely good, however we are also blessed with the lovely gift of a first draft. Unlike those poor people working in oil paints, we can easily go back to our work and cut things out, rearrange stuff and rewrite items. The first draft does not have to be perfect.

Also remember that the muse and the inner editor is really you. There are no two other people living in your head. You can learn to control them. You don’t have to wait for the muse to strike and you don’t have to listen to the inner editor. November and NaNoWriMo is the month to take control and learn what you can do when you don’t let those excuses get in the way. Repeat to yourself ‘first draft’ every time you start looking back and thinking this is crap. The only thing you can’t fix is the story you never write.

Several years ago I wrote NaNo for the New and the Insane, a set of helpful articles for people leaping into the madness each year.  The booklet is free and can be downloaded from Smashwords in a number of different formats.

Have fun! That’s what NaNo is really all about!

About the Author. Lazette Gifford owns Forward Motion for Writers and publishes the ezine Vision: A Resource for Writers.  She blogs at Joyously Prolific. She also owns A Conspiracy of Authors, a publishing and marketing co-op which includes several other indie authors.  Her traditionally published works includes Honor Bound, Star Bound and Farstep Station from Yard Dog Press; Between a Rock and a God’s Place (Issue #21 of Andromeda Spaceways Inflight Magazine); and the eight volume Dark Staff series from Double Dragon Publishing. Her Indie books include Ada Nish Pura, Kat Among the Pigeons, and Summer Storm.