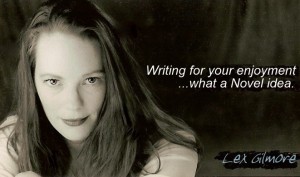 Welcome, writers! Today’s National Novel Writing Month guest post comes from writer Lex Gilmore. I met Lex on Twitter and have appreciated her support and encouragement through our email conversations. Lex graciously agreed to write a guest post to help me kick off NaNoWriMo. Thank you, Lex!

You’ve dreamed of writing your own novel. Imaginary characters speak to you deep in the recesses of your mind, right? You’ll laugh right in the middle of a serious situation because you can picture how your character would or would not react appropriately to it. It’s just so much fun living life doing at least one thing that you’re crazy about. And you may not know that you’re crazy about writing yet, but that’s okay. Here’s your chance!

Join me and over hundreds of thousands of people all over the globe who will be signing up for National Novel Writing Month, affectionately referred to out-loud as NaNoWriMo. Go ahead, say it. It just makes you smile. Before you decide to sign up, let’s review a few reasons that you’re itching to do so (which you can remind yourself of later if you start to panic).

You finally have a fixed deadline that you depend on to push you, you won’t be in a solitary state like writers are the rest of the year because of forums and contests, and last but not least, your inner critic has to stay repressed as you break free from perfectionism and allow yourself to finally be liberated—in one form or another.

I know a young woman that signed up for NaNoWriMo in 2010 for her inaugural year. She had never even heard of it before, but went ahead and gave it a try. After writing 1600 words a day, the encouraged ‘norm’ for finishing 50,000 words in a month, she became enthusiastic that she really could meet her goal. And it didn’t take as much time as she thought to put pen to page (or screen). She even appeared in person at her city’s Kick-Off Party at a local bookstore, making friends before the month even started! Buying the NaNo T-shirt became an immediate need to be filled. Every other day she would hop onto the online forums on NaNo’s website, finding encouragement. It was easy to keep up her goal of posting 1600 words at the end of each night. And then it happened.

About the sixth day into November, she went crazy. And I mean completely nuts! It finally hit her. The day arrived in which life barged in and didn’t allow her to write as much. She found herself chatting on the forums and Facebook sharing about her experience that she ended up behind in her word count. Her son must have needed a clean T-shirt for school because the NaNo shirt went missing. Stress raised its ugly head! The “Live Write-ins” at the local libraries offered up like-minded people to embrace the stress with her as door prizes were handed out like candy. Well, better than candy—like iPods and stuff people actually want. And yet, she found that much of what she had written included dead ends, characters that appeared and disappeared—never to return, thus she sensed the time might have been an over-all waste.

However, to prove that it was worth it to attempt—despite the late nights, infinite cups of coffee, unwashed hair (no time!) and utterly forgetting to eat anything at all—she signed up again, for 2011.

OK, okay…the woman is me. I’m Lex Gilmore. Surprised? Well, I was. Surprised at the fact that I stressed over anything, really. I absolutely loved the experience and hey, I ended up with a somewhat mangled manuscript that I was able to perform a Re-Write Operation on and salvage some life from, to boot! And I can tell you that November holds quite a different feeling for me now, even though my birthday is on November 11th. I get so wrapped up in “NaNo time, NaNo time!” (I run across the house, hands raised every day announcing it), that I receive more motivational comments from fellow NaNos that allow me to emotionally soar throughout the month than I do simple birthday cards for one day! It truly is special.

You’ll just have to experience it for yourself. Sign up here and don’t forget to look me up! Leave me a comment to help me through J. In fact, I’ll be blogging throughout November about my progress as I follow each page of Write-A-Thon! Write Your Book in 26 Days (and live to tell about it) by Rochelle.

We will all be in the company of professional and amateur writers alike. Come on, let’s join together and release our dreams into the world.

About the Author. Lex Gilmore is a two-time Addy Award Nominee and former Writer/Producer for a major television network. She was a creator, copywriter and producer of hundreds of television commercials, many made-for-TV movies and numerous voice-overs. Currently, she writes Romantic & Historical Fiction. Gilmore has been chosen as a judge for various book & writing Contests, as well as a Book Reviewer for Published Authors (Romance Writers of America, American Christian Fiction Writers, and Indie Publishers). Lex also creates websites & author one-sheets for her colleagues. Visit her online at http://www.lexgilmore.com/ and catch her blog at http://lexgilmore.blogspot.com/.