Today is Epiphany, and marks the end of the Christmas season for Christians. In my first career, I worked as a Lutheran pastor. In the early days, I ministered at two churches in Western Pennsylvania. Both congregations had the practice of setting out the Nativity set early in Advent. The stable, complete with straw, would sit at the front of the church. The main characters—Mary, Joseph, shepherds, sheep, and kings—would be perched on window sills, slowly making their way to “Bethlehem.” Each week, unseen hands would move the characters a bit closer to the stable. At midnight on Christmas Eve, a small child would bring in the baby Jesus and put him in a manger.

At my house, the nativity characters have never done much of anything—at least until my daughter Elly came along. Elly loves to play with the creche. When she was small, she would make the kings and shepherds talk to each other. This year, she has created several unusual depictions of the nativity scene.

In my former career as a minister (and in my graduate study to become a minister), I never felt free to make up new versions of the nativity story. But my daughter does not have those hangups. Many writers have taken traditional stories (like the Jesus story) and reimagined them as novels or poems.

Write Now! This weekend, take a familiar story—from the Bible or a fairy tale—and rewrite it from a different perspective, with new plot points, or with additional characters. If it helps, get some physical representations of the characters and play with them. And, if you need inspiration—here are some of Elly’s Nativity Stories! 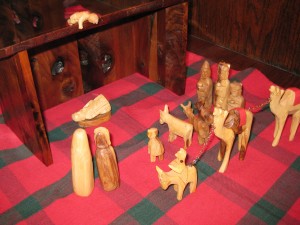 2. One king down and the animals are about to eat Jesus. 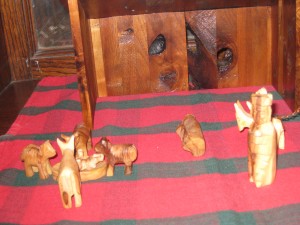 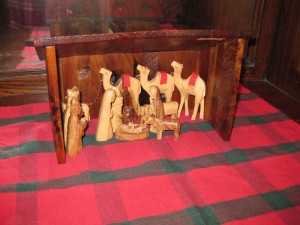 4. We blame the turtle for this tragedy. 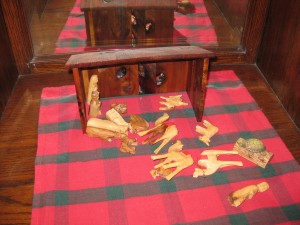 5. Someone is smoking out behind the manger. 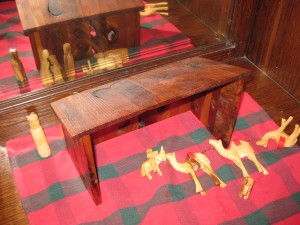 Your turn: Share your suggestions for getting creative with traditional stories. What has worked in the past? How has this sparked your creativity?